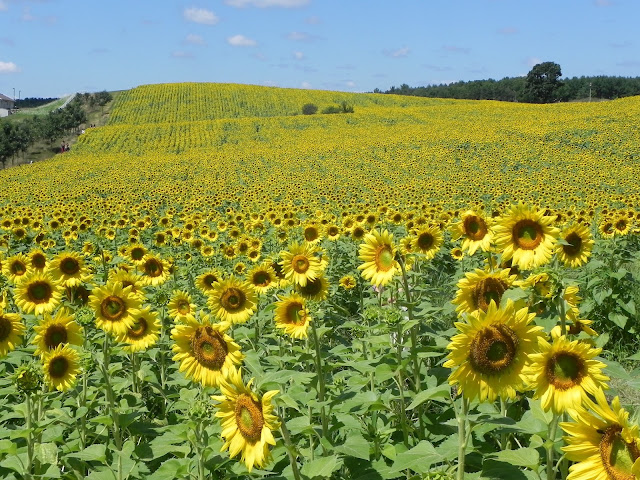 This past week I had the distinct pleasure of visiting Pope Farm Conservancy in Middleton, Wisconsin.


Pope Farm Conservancy is 105 acres that sits on top of three recessional moraines in the Town of Middleton, Wisconsin, where three different watersheds come together.

Six different Prairie Restoration projects and seven different crops including a field of sunflowers provide tremendous synergy that attracts wildlife to the conservancy. Forty interpretive signs follow the historical aspects of the land. They start with the Glaciers and land formation, followed by the Native Americans, settlers, the CCC project in the 1930’s, to today’s methods of erosion control.

All of this, combined with eight miles of walking trails and picnic areas provide the visitor with an unforgettable experience.

I chose to visit now because of the spectacular bloom a half a million sunflowers (and I wasn't the only one...). 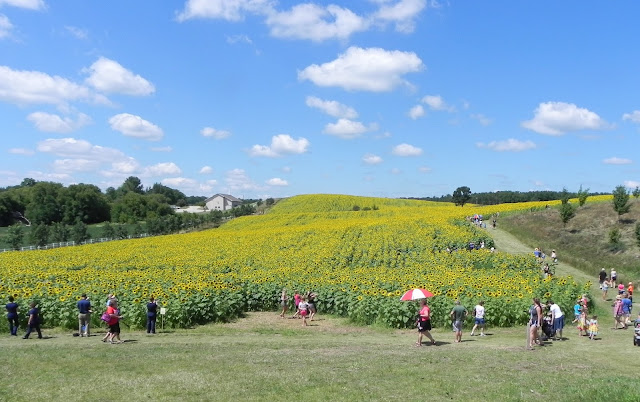 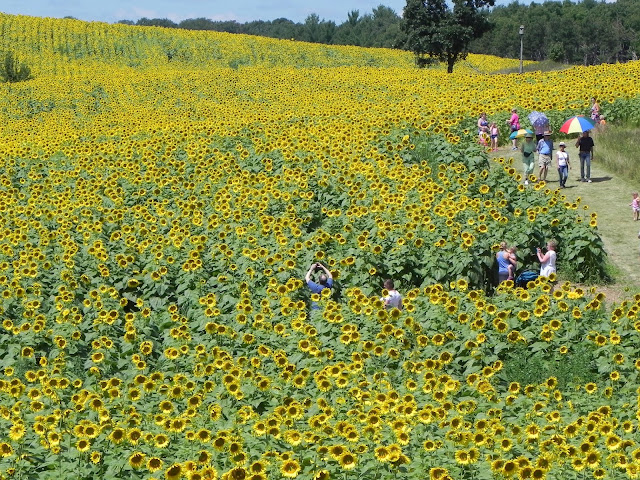 I'll use this occasion to raise a question about phototropism.   These sunflowers were all facing east when I photographed them in mid-morning.  During the day they will track the sun as it moves across the sky.  But what happens during the night?  Are they programmed to turn back toward the east in anticipation of the next sunrise, or does it require the first beams of morning light to trigger them to swivel back toward the east again?

I could probably look this up, but I need to do something else now, and I suspect some reader with knowledge of plant biology will be able to supply the answer for us.

Addendum:  best answers so far are in the link offered by Kyle Michelli and in the video link provided by Zhoen in the comments.

Addendum #2:  Two tips of the blogging cap to readers Rob from Amersfoort and to Patty, both of whom back in August (I'm a bit behind in my blogging), provided links to the research of Stacy Harmer at UC Davis, who has studied phototropism in sunflowers.

As the plants grew from young seedlings into mature, yellow-headed adults, the researchers found that the sun-tracking movements of the plant became less and less noticeable, until they stopped altogether.

Using a time-lapse camera, they were able to see that the east side of the stem grew longer during the day, turning the plant’s head to the west. At night, the reverse was true — the west side elongated, causing the plant to face the east...

The scientists report that even when the plants were grown under constant, fixed overhead lighting, they maintained the same head-turning rhythms they displayed in the field for several days... these results suggest that the sunflowers’ movements are regulated by something other than simple growth toward the sun. Some kind of circadian clock was also controlling the plants’ twists and turns...