Tanks for the gold

As reported by Popular Mechanics:


A tank collector in the United Kingdom was in for a surprise when he and his mechanic opened one of his tank's diesel fuel tanks. Inside were gold bars totaling approximately $2.4 million dollars... 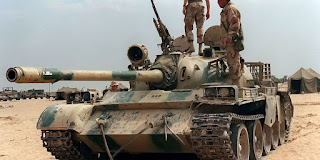 Mead found the tank, an ex-Iraqi Army Type 69, on sale on eBay and traded it for an Abbot self-propelled howitzer and a British Army truck...

The gold is thought to be Kuwaiti in origin—Iraqi forces engaged in widescale looting of the country after the August 1990 invasion of Kuwait.

Just another reminder (if one is needed) of the truth of General Smedley Butler's assertion that "War is a racket."