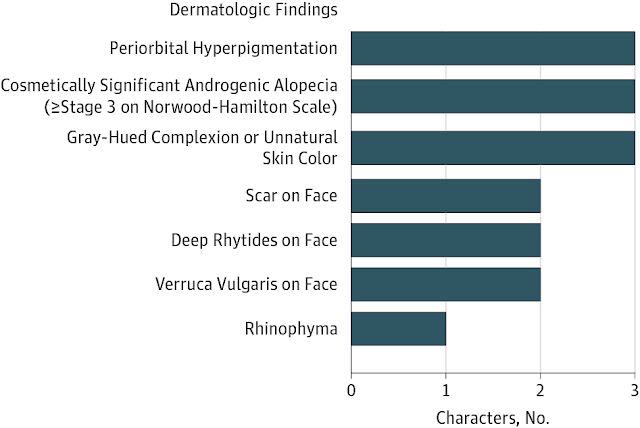 As reported in JAMA Dermatology:


Dichotomous dermatologic depictions between heroes and villains date back to the silent film age and have been used to visually illustrate the contrasting morality between these character types. Classic dermatologic features of villainous characters include facial scars, alopecia, deep rhytides, periorbital hyperpigmentation, rhinophyma, verruca vulgaris, extensive tattoos, large facial nevi, poliosis, and albinism or gray-hued complexions. These visual cues evoke in the audience apprehension or fear of the unfamiliar and provide a perceptible parallel to the villainous character’s inward corruption...

These portrayals have ignited the formation of advocacy groups aimed at diminishing the perpetuation of existing discrimination by discouraging the use of degrading stereotypes in film. Notably, the National Organization for Albinism and Hypopigmentation (NOAH) has protested the portrayal of people with albinism as villains, although with limited success...

The all-time top 10 American film villains and heroes were obtained from the American Film Institute 100 Greatest Heroes and Villains List.

Detailed discussion at the link.   And a related article at The Guardian ("Disfigured heroes like Deadpool help people like me fight prejudice."