A modern equivalent of death by crucifixion 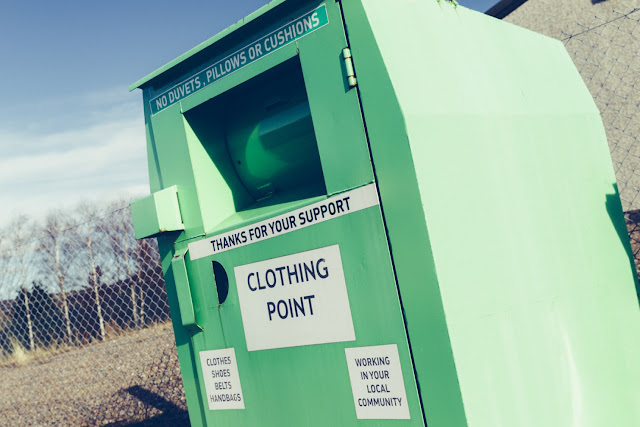 This unfortunate lethal accident was reported in the Washington Post:


Judith Permar drove to a clothing drop-off box at about 2 a.m... According to police, she stood on the stepladder so she could reach the top of the box. She rummaged through the donated items, even taking some out... After allegedly removing several bags filled with clothes and shoes, she slipped as the stepladder collapsed, her arm catching in the door...

The fall broke her arms and wrists, which were trapped in the box. Her feet, meanwhile, didn’t quite touch the ground, leaving her hanging. There she dangled until 8:30 the next morning, when she was finally found. Bags were scattered around her, and the Hummer’s engine was still running.

The temperature had dropped to 21 degrees that night, according to Weather Underground. Permar was pronounced dead at the scene. The county coroner James F. Kelley listed the cause of death as blunt force trauma and hypothermia. 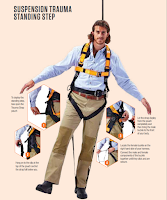 For practical purposes, the cause of death listed by the coroner is adequate, but the pathophysiology of this lady's death is considerably more interesting.  Neither minor fractures nor freezing temperatures would kill her in six hours.  For a deeper understanding we need to look at the cardiovascular and pulmonary implications of her situation.

EMTs are trained to recognize and treat suspension trauma, which typically happens to construction workers in harnesses.  The Journal of Emergency Medical Services and the United States Department of Labor webpages have detailed explanations of the cardiovascular aspects - intravascular fluid pooling in unsupported legs, leading to impaired cardiac output and cerebral hypoperfusion. Special harnesses that support one leg (as in the embedded image at right) may be lifesaving.

I'm going to focus instead on the pulmonary problems of unsupported suspension.  Notice the worker in the suspended harness has support at the pelvis; the abdominal viscera remain in approximately normal position, as does the diaphragm, and ventilatory gas exchange can proceed normally.

Now let's look at historic crucifixion.  This lady's death was not crucifixion, because there was no "crux" (cross), but her cause of death may well have been similar to that experienced by Christian martyrs.

Crucifixion was not principally designed as a method of execution; there are faster and simpler methods to achieve that end.  Rather it was intended to be slowly lethal, thus incorporating torture as punishment and shame as part of a prolonged public display.  The component of suffering is implicit in our modern use of the derived word "excruciating." 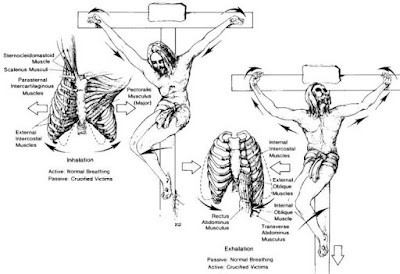 In a normal breathing cycle, inhalation requires active motion by the diaphragm, while exhalation is passive.  When a person is suspended, the dependence of the body moves the chest wall toward a full inspiratory position; exhalation then becomes an active rather than a passive process, requiring lifting the body by pushing with the feet and lifting with the arms, a process made more painful by
the nailing of the feet.

To prolong the crucifixion for perhaps days until inanition and dehydration develop, support for the lower body needs to be supplied with a crude seat (a sedile or sedulum) affixed to the cross, and/or a small plaform to support the feet (nails through the feet would serve the same function).  This feature is evident in some artistic portrayals of crucifixion, where the knees are shown to be flexed (embed at the right: a crux simplex without crossbar).

If the authorities (or bystanders) wished to offer a modicum of mercy and effect a more rapid death to end the suffering, one means to do so was to deliver a blow that would break the legs below the knees (crurifragium or skelokopia).

There is a lot more to discuss regarding positional asphyxia.  It is relevant to deaths that occur during restraint by law enforcement officers, to deaths in nursing homes when elderly persons become entangled in bedclothes and bedrails, to "Santa Claus" deaths of burglars entrapped in chimneys, and to the deaths of beached whales and thousands of participants at the battle of Agincourt.   Later.