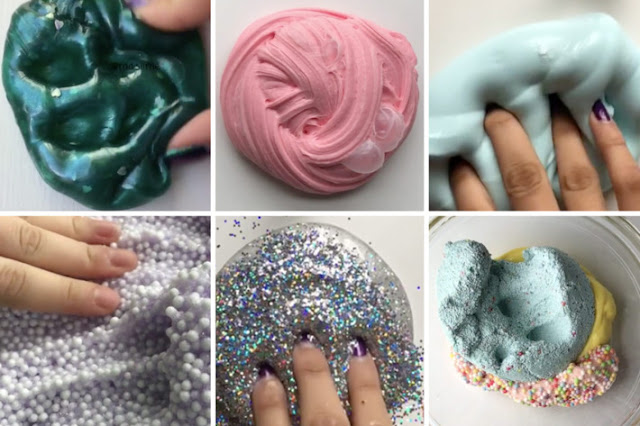 A tip of the blogging hat to the elves at No Such Thing As A Fish for explaining in a recent podcast how "slime" is now a "thing".  I found a detailed explanation in a column at nymag.  Herewith some excerpts:


Slime, if you haven’t encountered it on any of your social feeds — or at a child’s birthday party — is a strange, mushy semi-solid that can be made easily with Elmer’s glue, borax, and water, plus a mess of strange sequins, colored dye, and commentary. Slime is so popular as a craft project among teens and preteens that stores are struggling to keep Elmer’s glue on the shelves...

Slime videos are part science, part meditation, and part art form. They’re also a business. Slime creators have hundreds of thousands of followers, and sell their slime on Etsy for money. @Slime.Bun, one of my favorites, has more than 200,000 followers; @slimequeeens has almost 700,000. It’s an industry dominated by teens who started making their own slime just because they loved it — and starting selling it to enable their habit. Alyssa J., a 15-year-old slime creator whose mother preferred that she keep her last name secret for privacy reasons, just started her slime account in August 2016. She says she saw tutorials on Pinterest, and that it “just looked fun,” so she decided to start an account herself. Alyssa’s account, @craftyslimecreator, now has 431,000 followers...

For Donna Boyd, a 17-year-old from Harrisburg, Virginia, slime is therapeutic. She’s never purchased slime, or made it herself. She just watches hundreds of videos from her five favorite accounts over and over again. “It honestly just makes me happy and de-stresses me,” Donna told me. “I suffer from anxiety, and slime videos help me a lot during panic attacks.” She says she gets lost in them after watching a few, going into a kind of meditative state. One teen I spoke to, Rachel M., told me she spends “at least 15 hours a week” just watching slime videos and playing with slime. She has only bought two slimes herself, but she loves them and says, “I need them.”..

“It doesn’t matter what it’s used for,” Alyssa told me near the end of our interview, dragging out “used” so that it sounded like the most absurd request in the world for a giggly, blue goo to have a purpose. “It’s just slime. Get it?”

Here is a sample video:

BTW, the company that makes Elmer's Glue is private.  You can't buy stock in it.  I checked.