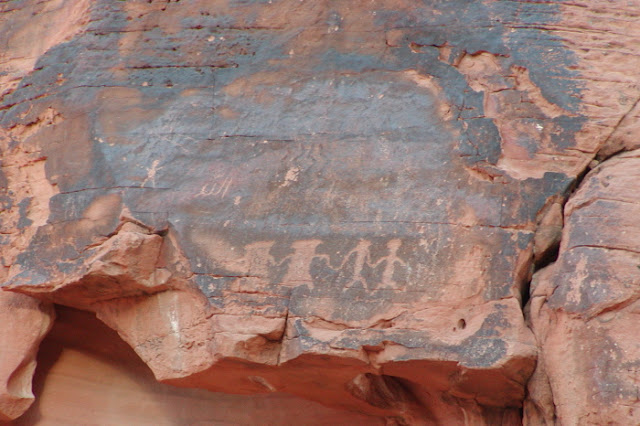 Most readers are familiar with the existence of "desert varnish" - a hard encrustation that develops on rocks exposed to the elements in a dry desert.  I had always assumed that the process was a slow oxidation of surface minerals, so a hat tip to reader David Laidlaw for sending me a link that explains that the process is a microbiological one.


Desert varnish is a thin coating (patina) of manganese, iron and clays on the surface of sun-baked boulders. Its origin has intrigued naturalists since the time of Charles Darwin. According to the classic paper by Ronald I. Dorn and Theodore M. Oberlander (Science Volume 213, 1981), desert varnish is formed by colonies of... bacteria living on the rock surface for thousands of years. The bacteria absorb trace amounts of manganese and iron from the atmosphere and precipitate it as a black layer of manganese oxide or reddish iron oxide on the rock surfaces...

Several genera of bacteria are known to produce desert varnish, including [the extremophiles] Metallogenium and Pedomicrobium... the remarkable hardness of desert varnish, which is almost as hard as quartz (nearly 7 on the Mohs scale of mineral hardness)... perhaps 10,000 years are required for a complete varnish coating to form in the deserts of the southwestern United States... For thousands of years Native Americans have used desert varnish for their rock carvings.