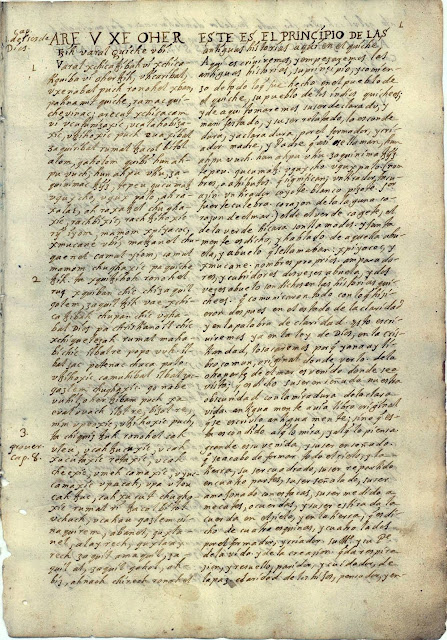 Popol Vuh "is a corpus of mytho-historical narratives of the Post Classic K'iche' kingdom in Guatemala's western highlands." Popol Vuh's prominent features are its creation myth, its diluvian suggestion, its epic tales..., and its genealogies."


"This is the first account, the first narrative. There was neither man, nor animal, birds, fishes, crabs, trees, stones, caves, ravines, grasses, nor forests; there was only the sky. The surface of the earth had not appeared. There was only the calm sea and the great expanse of the sky. There was nothing brought together, nothing which could make a noise, nor anything which might move, or tremble, or could make noise in the sky. There was nothing standing; only the calm water, the placid sea, alone and tranquil. Nothing existed. There was only immobility and silence in the darkness, in the night. Only the creator, the Maker, Tepeu, Gucumatz, the Forefathers, were in the water surrounded with light. [...] Then Tepeu and Gucumatz came together; then they conferred about life and light, what they would do so that there would be light and dawn, who it would be who would provide food and sustenance. Thus let it be done! Let the emptiness be filled! Let the water recede and make a void, let the earth appear and become solid; let it be done. Thus they spoke. Let there be light, let there be dawn in the sky and on the earth! There shall be neither glory nor grandeur in our creation and formation until the human being is made, man is formed. [...] First the earth was formed, the mountains and the valleys; the currents of water were divided, the rivulets were running freely between the hills, and the water was separated when the high mountains appeared. Thus was the earth created, when it was formed by the Heart of Heaven, the Heart of Earth, as they are called who first made it fruitful, when the sky was in suspense, and the earth was submerged in the water."

Together, gods attempted to create living beings so that they may be praised and venerated by their creation. Their first attempts (animals, mud man, and wooden man) proved unsuccessful because they lacked speech, souls, and intellect.


"This the Forefathers did, Tepeu and Gucumatz, as they were called. After that they began to talk about the creation and the making of our first mother and father; of yellow corn and of white corn they made their flesh; of cornmeal dough they made the arms and the legs of man. Only dough of corn meal went into the flesh of our first fathers, the four men, who were created. [...] And as they had the appearance of men, they were men; they talked, conversed, saw and heard, walked, grasped things; they were good and handsome men, and their figure was the figure of a man."

Women were created later while the first four men slept.