The complex genetics of mimicry 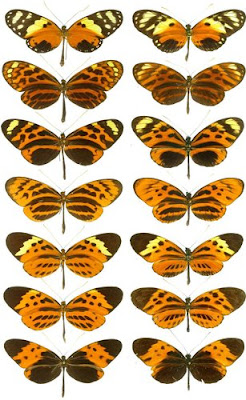 The gaudy brown Brazilian butterfly known as Heliconius numata has long puzzled geneticists. It has seven different wing patterns, each of which mimics that of a different local species of Melinaea, another group of butterflies...

To help perfect their imitation of the seven Melinaea models, the butterflies have
somehow locked what should be a continuous range of natural variation into seven specific patterns...

A team of French and British biologists, led by Mathieu Joron of the National Museum of Natural History in Paris, has discovered the butterfly’s solution. It has locked together in a supergene a cluster of 18 genes involved in specifying the wing pattern. The supergene is inherited as a single unit, the biologists report in the current issue of Nature.

Further details at the Nature and NYT links.  Via the February 2013 issue of Badger Butterflyer, the outstanding newsletter of the Southern Wisconsin Butterfly Association.

For the enthusiast, there is also an explanatory video.