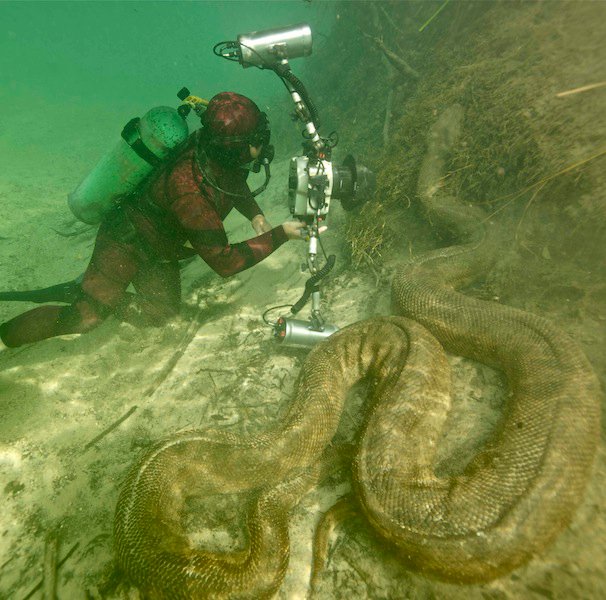 I found the photo at imgur, but it took a while to trace its provenance in order to confirm its authenticity.  Finally found this in Brazil Dispatch in 2012:


CAMPO GRANDE, Brazil – Images of a giant anaconda being photographed underwater created a stir this week on Facebook Brazil. After the amazing images were posted and shared, many Facebook users posted comments doubting the authenticity of the photographs... Biologist Daniel De Granville, who took the pictures, assured the G1 network that the images of the huge reptile, which he estimated to be about seven meters (23 feet), are genuine and that he captured them in the Formoso River, in Bonito, 300 km (186 miles) from Campo Grande... De Granville says that the photos are original and made in a natural environment without any digital manipulation beyond the basic settings for color, sharpness and saturation. The images were captured in August 2010 in a place away from the city’s tourist attractions and in an area restricted to most visitors.

More details at the link.

Addendum:  A hat tip to Brazilian reader Binho for locating this ten-minute documentary video of the anaconda shown in the photo above.