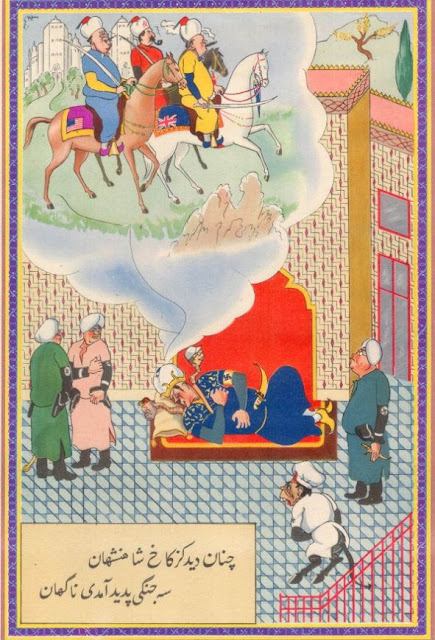 The man sleeping on the couch has the face of Adolph Hitler (in the body and clothing of the evil ruler Zahhāk, from Ferdowsi’s Shahname, the Book of Kings, the Persian national epic).  The two snakes on his shoulders are Mussolini and Tojo. He is dreaming about three kings who are coming to kill him: Churchill, Stalin, and Roosevelt.

This miniature (part of a larger series) was created by a British graphic designer; he incorporated traditional Persian art, literature, and iconography in an effort to appeal to the people of Iran to support the "three kings" in their opposition to Germany.


The British and Soviet forces invaded Iran from the north and south between August 25 and September 8, 1941. The reason for the invasion was that after the German offensive against the Soviet Union in June, they felt threatened the Iranian petroleum resources in their management, and they also intended to transmit war material from the Persian Gulf via rail to the Soviet Union. Although Iran was neutral, the Shah had basically done the inter-war modernization of the country with German help, and he refused to expel the German advisors on British request. After the peace treaty the British deposed him and expelled him to Egypt, and raised on the throne his son Reza Pahlavi, who represented the Anglo-American policy, and declared war on Germany. Subsequently, in November 1943 opened the Tehran conference with the participation of the three above kings, with the aim of coordinating the common war efforts and to open the second, western front.

The easy defeat of the Persian army and the humiliation of the occupation hit very hard the country’s public opinion. This was acerbated by the fact that the massive British buying-up of food for the troops caused a severe famine in the occupied zone, and that, on the principle of “divide and conquer”, both occupying forces excited the ethnic minorities living under their power against the Persian rule. All this is described in detail in Simin Daneshvar’s Savushun (1969), the key novel of 20th-century Iran.

It is understandable therefore, that on the occasion of the Tehran conference the British saw it opportune to present the purpose of their arrival in an easily perceptible visual form to the Persian people...

I suspect few Americans are knowledgeable about this aspect of the second World War.  Additional historical context and the other images in the series, are presented at Poemas del rio Wang.