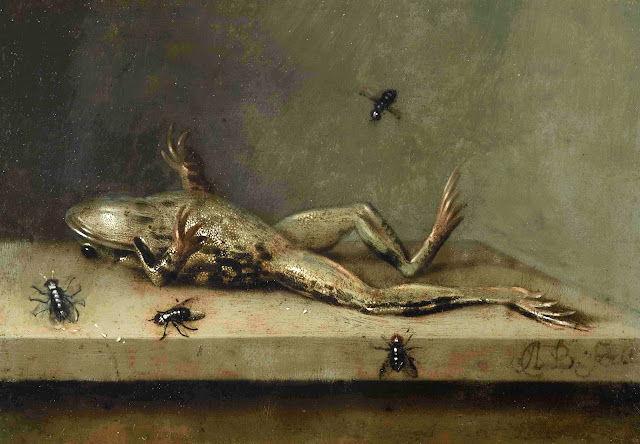 I never had a course in Art 101, so I was blissfully unaware that there even was such a painting as "Dead Frog with Flies."  You learn something every day.


Eldest son of Ambrosius Bosschaert the Elder, this still-life painter pursued his father’s speciality: flowers and still lifes with fruit. A number of vanitas paintings by Bosschaert are known, and it is to the latter category that this macabre picture, unique in the painter’s work, belongs. Executed in about 1630, the subject had precedents in the late sixteenth century, in meticulous studies of insects, flowers and animals, notably by Joris Hoefnagel and his son. The copper surface lends a pearly glint to the oil pigments, rendering the frog’s damp skin to perfection.

Now, how do you improve upon that?  Contemporary artists Rob and Nick Carter create "digital" still lifes based on classic works:


The couple’s latest work, to be unveiled by the Fine Art Society in London this week where it will be on show before it moves to Maastricht Art Fair next week, is by Bosschaert’s son, Ambrosius Bosschaert the Younger. Called After Bosschaert The Younger's 'Dead Frog with Flies' (c. 1630), it will show a dead frog slowly decompose over time... 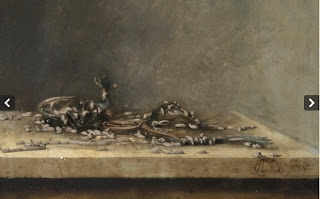 “[The team] had to study each major organ inside, so that they could understand how the frog would bloat up. Each of the maggots has their own character in terms of how they move and when they stop, and how they grow after eating parts of the frog. That’s all written in a script.”

So realistic is the film, he says, that their four year old daughter (her favourite animal is a frog) can't watch the first four minutes, when the frog comes briefly back to life. [the sequence of images loops continuously]

Details (and a sequence of images) at The Telegraph.