Jell-O as a food preservative 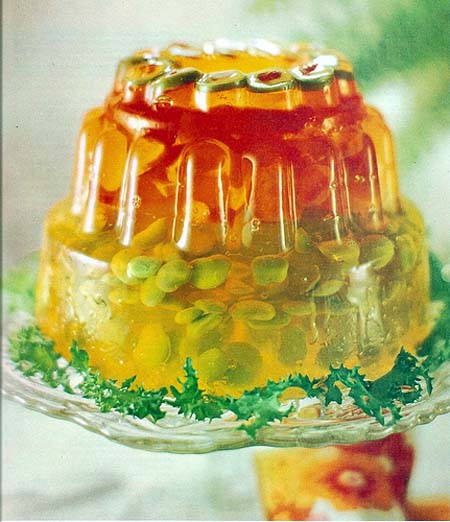 In my childhood (the 1950s), Jell-O gelatin was a standard, even a special, dessert.  This week I found at Collector's Weekly a very interesting article entitled "Making, and Eating, the 1950s’ Most Nauseating Jell-O Soaked Recipes."


It’s really hard to say why the savory Jell-O salad became something. I was talking to my dad about this the other day, and he said it became this crazy thing in his family where every holiday, all my aunts would try to outdo each other with these fantastic, multi-layered gelatin molds...

I haven’t really heard a lot of food historians talk about this, but I’ve found that food mixed into Jell-O stays fresher much longer than if you have it by itself.

Like days. For example, Perfection Salad is basically coleslaw inside of lemon or lime Jell-O, so it’s got cabbage and carrots and all kinds of stuff. But the cabbage will stay fresh for over a week. If you take a bite of it, it’s still crunchy. My husband, Tom, tries all this. He’s a chemist, so he’ll keep tasting it long, long after I’m done with it. But if you make regular coleslaw and put dressing on it, the cabbage becomes soggy after three days. And after five days, you’re not going to eat it.

We’ve done a lot of different Jell-O stuff and noticed that freshness is basically extended when you encase things in Jell-O. We’ve done cakes covered with gelatin, and the cake would still be moist after a week and a half. We made sandwiches with gelatin, open-faced sandwiches with flavored gelatin poured over the top, which was supposed to be like mayo. I thought it was going to be disastrous. Tom wolfed them down. He’s like, “These are really good and the bread isn’t soggy.” I’m like, “Are you kidding me?” Two days later, they were still edible.

I don’t know if being frugal and using up leftovers was part of the Jell-O trend, putting them in gelatin and then trying to force them down that way. But that’s my theory.