I need to stop blogging for about a week, and I want to leave this post on the top of the front page while I'm gone.

The Voyager spacecraft's "pale blue dot" image, and Carl Sagan's commentary upon it, have been the subject of many video tributes; the one embedded above is my favorite because of the juxtaposition of so many classic film clips accompanying the spoken text.

Voyager carries a golden "phonograph record" embedded with basic information about our solar system and human biology, which most people understand as an attempt to initiate contact with other, extraterrestrial, intelligent species.  It's really nothing of the sort, because it didn't even exit the solar system until 2012, and after another 40,000 years it will still be 1.6 light-years from the nearest other star.  So the artifacts on Voyager are best viewed as a time capsule of our current existence rather than a communication device.

Traversing cosmic distances requires faster speeds than can (currently) be achieved by physical objects.  Which leads us to a consideration of radio transmissions.  Here's the opening scene from the movie "Contact," which depicts radio signals from earth penetrating out into space:

The further out you go, of course, the older are the signals you/[or an alien] could potentially hear/detect.  The viewpoint pulls back beyond our solar system until it is even outside our galaxy.

I had always been impressed by that.  Until... several weeks ago I encountered this spectacular image at Cliff Pickover's Reality Carnival: 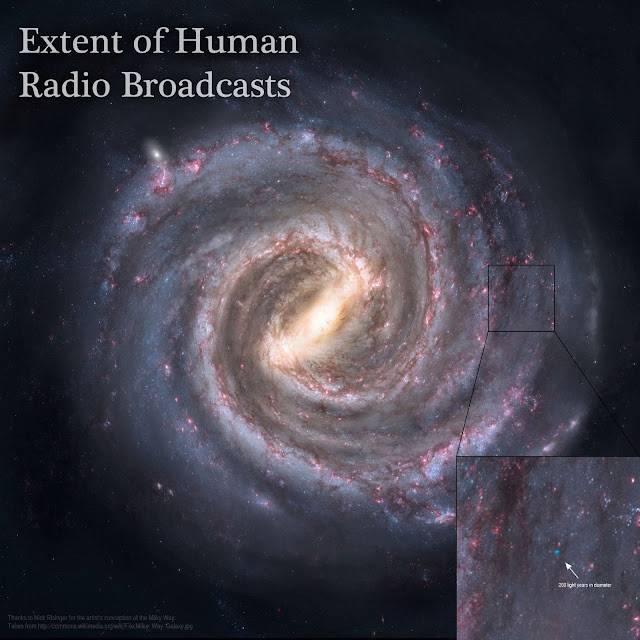 I had to compress the image to stay within the limits of my bloghost, so I don't know if the embed above will be clickable to supersize.  If not, you can view the original here in all its glory*.  At the right bottom is a box, enlarged from the right center of the image, showing another "pale blue dot."

But this time, that blue dot is not Earth, as it is in the Sagan/Voyager story, but rather a representation of a sphere of a diameter of 200 light-years.  That's the total distance that emissions from earth have traveled since our development of the technology.

I can't get this image out of my head.  That little dot is the maximal extent of human influence in our galaxy - and there are over a hundred billion such galaxies in the known universe.

The human mind isn't capable of processing such realities.  At least mine isn't.

*the text at the bottom left reads "Thanks to Nick Risinger for the artist's conception of the Milky Way."  Image taken from here.