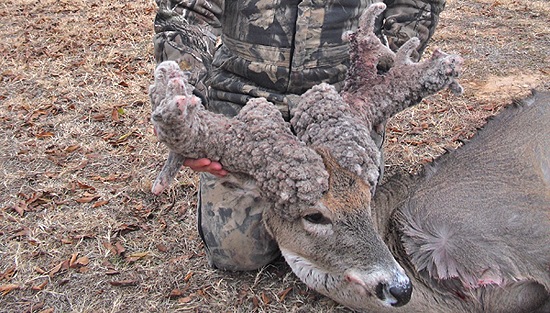 The buck was so odd that Nickel thought the buck’s rack was wrapped up in twine or something else.

“I thought there was stuff wrapped up in his rack. I could see that he was fairly wide and had some mass, it just didn’t make sense. I almost didn’t shoot him as I’d never seen anything like this before. I couldn’t take it anymore and decided to shoot this thing,” reported Nickel...

A cactus buck is a deer that has... cryptorchidism, which results in velvet remaining on antlers and continuing to grow throughout the year. The condition generally occurs to bucks that have irregular testicles or have incurred testicular damage, which impacts testosterone levels. Testosterone regulates antler growth and development.

Via North American Whitetail.  There's another example at The Local:


Animals with this condition are not expected to live for a long time. Once the antlers grow over his eyes, the animal will be unable to fend for itself.