Can you explain this hollowed-out die? - answered 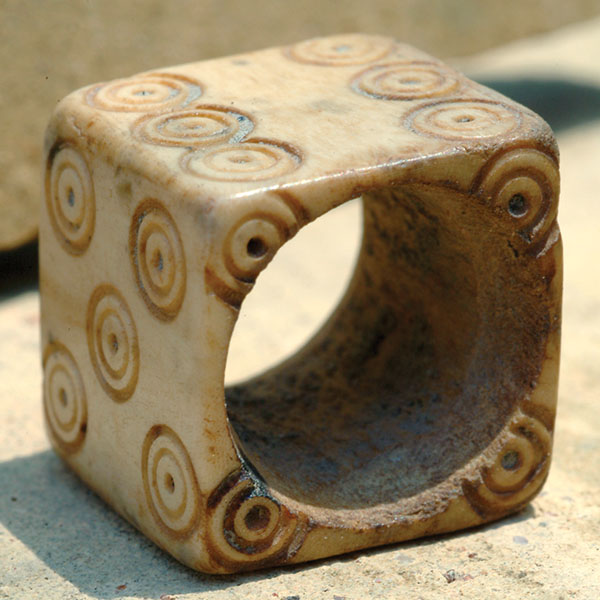 Presented as a challenge to retired dungeonmasters and ninth-level paladins.   The image is presented without further explanation in an Archaeology article about excavations in Naples, Italy.  Ancient Romans were well known for their propensity for gaming (type "Roman dice" into Google Images), but I've never seen a die hollowed out in this fashion.

It looks to have been made of ivory or bone, and unless it was created or adapted for some decorative purpose, the hollowing-out must have been intended for some functional purpose.  The two affected sides are for the 3- and 4-pips, with the latter evident on the image around the edges of the cavity, so I think it was still used as a six-sided die, not as a four-sided one.

One might assume that the hollowing was done to prove that the die was not asymmetrically weighted, but would it then still be a fair die?

And if it would not be a fair die on a throw, does that revert us back to the other option - that this was decorative, perhaps worn as a ring on a finger?

Addendum:  An anonymous reader found this (unfortunately unsourced) similar die at The Cartographer: 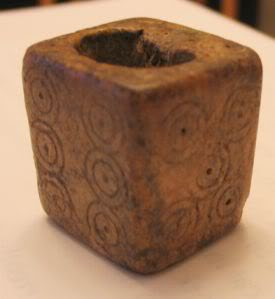 This one was "deliberately carved from a large animal bone with the marrow channel as a feature," and on the 3-pip side the hole became the central pip.

Addendum #2:  A big hat tip to MacGregor Historic Games for what appears to be the definitive answer to my question:


This was actually a fairly common technique to make larger dice out of marrow bones of sheep from Roman times and even later. This one is simply missing the two plugs or end caps that would be glued in place to cover the holes. The book "Face to Face with Dice" (ISBN: 90-76953-88-0) discusses them and has several pictures and illustrations. It explains that a sheep or goat metatarsal bone could be ground into a square "stick" and then cut into several cubes. The faces with three and four were usually placed on the caps.

There have been some writers who have thought that these might be "loaded" dice with a bit of lead glued inside to favor one number, but X-rays of complete examples have yet to find any weighted versions of this type of hollow dice. I assume the thickness of the end caps might compensate a bit for the balance being a little off, or that they may not be "off" enough to be reliably predictable as loaded dice.

Here are some pictures of some complete examples.