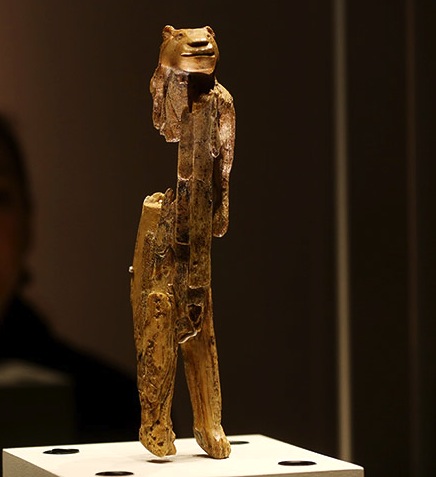 This carved mammoth tusk, from Hohlenstein-Stadel in Germany, was crafted 32,000 years ago.  It is presently among the holdings of the Ulmer Museum, with copies in four other museums in Europe and the U.S.


[It is] the oldest known zoomorphic (animal-shaped) sculpture in the world and one of the oldest known sculptures in general. The sculpture has also been interpreted as anthropomorphic, giving human characteristics to an animal, although it may have represented a deity...

Originally, the figure was classified as male by Joachim Hahn. From examination of some additional parts of the sculpture found later, Elisabeth Schmid decided that the figure was a woman with the head of a "Höhlenlöwin" (female cave lion). Both interpretations lack scientific evidence. European cave lions, male and female, lacked the distinctive manes of the African male lion, and so its absence here cannot lead to an interpretation as a 'lioness'. Recently the ancient figurine has more often been called a lion-headed figurine, rather than a 'lion man'. The name currently used in German, Löwenmensch—meaning "lion-human"—similarly, is neutral.

I'm wondering what kind of tool would have been used 32,000 years ago to craft such fine detail in the face.

Image cropped from a photo by Graeme Robertson in The Guardian.

Update March 2013: The History Blog notes that additional pieces of the figure have been found, and the estimated age has been revised (to an earlier date).  These excerpts also address questions re raised earlier re the polishing method and the dating method:
In late August 1939, geologist Otto Völzing was digging in the Stadel cave on Hohlenstein Mountain in the Swabian Alps when he found hundreds of fragments of a mammoth ivory statuette. He packed them hastily into a box but had no time to examine them. The excavation, funded by the SS, ended that very day because World War II was about to begin...

The first attempts at reconstruction in 1970 revealed a headless standing anthropomorphic figurine. During a more thorough attempt in 1988, researchers were able to glue together 220 pieces along with beeswax and chalk filler material, resulting in a lion-headed sculpture just under a foot high, 2.2 inches wide and 2.3 inches thick...

Early estimates put its date at around 32,000 years old, which made it one of the earliest figural sculptures ever found. It was carved with a flint stone knife out of a single mammoth tusk, then polished with leather and saliva... 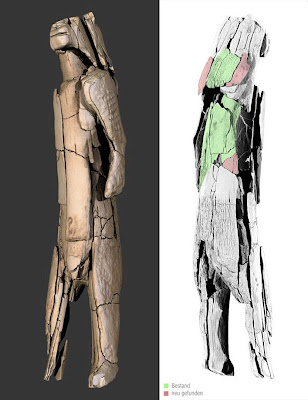 In 2009, a team of archaeologists led by Claus-Joachim Kind returned to the Stadel cave and re-excavated the find site. They sifted through all the 1939 backfill and found an additional 1,000 fragments. Some of them are minute, just a few millimeters in size, but some are substantial chips as large as a finger...

More concretely, researchers were able to radiocarbon-date bones found in Lion Man’s layer, and they are significantly older than previously thought, bringing the sculpture’s estimated age up to 40,000 years old...

[In] 2011 researchers at the State Conservation Office in Esslingen, near Stuttgart, began working on reconstructing the reconstruction. The glue from earlier attempts was dissolved and the old filler material removed. Using 3D computer modeling as a guide, the figurine is being reassembled piece by piece. The finished product will be taller, with a more complete back and some of the missing right arm in place.