Isolated for 40 years in the Taiga 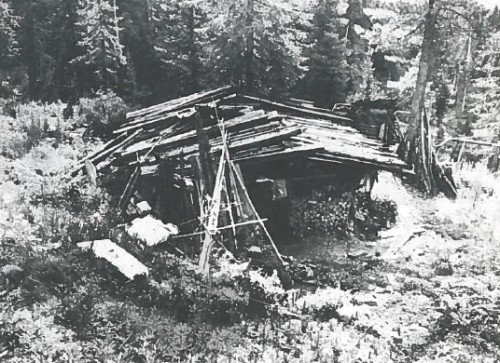 The Lykovs lived in this hand-built log cabin, lit by a single window "the size of a backpack pocket" and warmed by a smoky wood-fired stove.

Excerpts from a remarkable story at Smithsonian:


The sight that greeted the geologists as they entered the cabin was like something from the middle ages. Jerry-built from whatever materials came to hand, the dwelling was not much more than a burrow—"a low, soot-blackened log kennel that was as cold as a cellar," with a floor consisting of potato peel and pine-nut shells. Looking around in the dim light, the visitors saw that it consisted of a single room. It was cramped, musty and indescribably filthy, propped up by sagging joists—and, astonishingly, home to a family of five:


The silence was suddenly broken by sobs and lamentations. Only then did we see the silhouettes of two women. One was in hysterics, praying: 'This is for our sins, our sins.' The other, keeping behind a post... sank slowly to the floor. The light from the little window fell on her wide, terrified eyes, and we realized we had to get out of there as quickly as possible.

...The daughters spoke a language distorted by a lifetime of isolation. "When the sisters talked to each other, it sounded like a slow, blurred cooing."

Slowly, over several visits, the full story of the family emerged. The old man's name was Karp Lykov, and he was an Old Believer—a member of a fundamentalist Russian Orthodox sect, worshiping in a style unchanged since the 17th century...

Isolation made survival in the wilderness close to impossible. Dependent solely on their own resources, the Lykovs struggled to replace the few things they had brought into the taiga with them. They fashioned birch-bark galoshes in place of shoes. Clothes were patched and repatched until they fell apart, then replaced with hemp cloth grown from seed...

...they had no technology for replacing metal. A couple of kettles served them well for many years, but when rust finally overcame them, the only replacements they could fashion came from birch bark. Since these could not be placed in a fire, it became far harder to cook. By the time the Lykovs were discovered, their staple diet was potato patties mixed with ground rye and hemp seeds...

Lacking guns and even bows, they could hunt only by digging traps or pursuing prey across the mountains until the animals collapsed from exhaustion. Dmitry built up astonishing endurance, and could hunt barefoot in winter, sometimes returning to the hut after several days, having slept in the open in 40 degrees of frost, a young elk across his shoulders...

The rest of the family were saved by what they regarded as a miracle: a single grain of rye sprouted in their pea patch. The Lykovs put up a fence around the shoot and guarded it zealously night and day to keep off mice and squirrels. At harvest time, the solitary spike yielded 18 grains, and from this they painstakingly rebuilt their rye crop.

I'll stop here; it's not fair to excerpt more from the Smithsonian article.  Several comments.  First, it is possible for humans to run down wild animals, including antelope, because the muscles and cardiovascular systems of the latter are built for sprinting, but not for endurance.  Secondly, the way to boil water in the absence of metal is to heat rocks in a fire and then dump them into the water in a wooden vessel (fire-cracked rock is a familiar archaeological find at ancient campsites).

A video documentary about this remarkable family (in Russian, and unfortunately unembeddable) is at these links:  Part One.  Part Two.  Part Three.

Update March 2013:  This afternoon I received the following email from the staff at VICE:

VICE is releasing a beautiful new documentary called Agafia's Taiga Life that follows a family of Russian Old Believers who journeyed deep into Siberia's vast taiga to escape persecution and protect in 1963.

We are going to be holding a screening of the doc tomorrow, Thursday, March 28th at NYC's historic Explorers Club. Reception at 6pm | 7pm screening.

I understand that tickets are available through The Explorer's Club. Here's the trailer: