The history of "Ms." 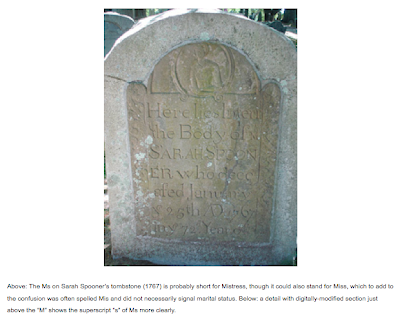 I routinely use "Ms." as a form of address on letters to women of unknown marital status, and I had always assumed that the term was a modern contrivance created several decades ago.  That apparently was a Ms-understanding on my part, as the Oxford University Press blog explains:


The form goes back at least to the 1760s, when it served as an abbreviation for “Mistress”... and for “Miss,” already a shortened form of “Mistress,” which was also sometimes spelled “Mis.” The few early instances of “Ms.” carried no particular information about matrimonial status (it was used for single or for married women) and no political statement about gender equality... While “Miss” was often prefixed to the names of unmarried women or used for young women or girls, it could also refer to married women...

Ms. didn’t really take off until the politically-motivated language reforms of second-wave feminism and the cultural impact of Ms. Magazine in the 1970s. Many of the form’s popularizers at that time thought of Ms. as a blend of Miss and Mrs., but some evidence suggests that it derives more directly from Miss, or possibly from Mistress.

It may have come from all of these, at different times. The 1885 citation from the Vermont Watchman (see illustration left), which has just come to light, provides a new link in the development of Ms. This newspaper ad, masquerading as a news story, contrasts Ms. Parrtington with Mrs. Dull, suggesting that Ms. is meant to abbreviate Miss...

The earliest example of Ms. found so far is on the tombstone of Ms. Sarah Spooner [top], who died in Plymouth, Massachusetts, in 1767... the Ms. on her tombstone is not a stab at language reform or a slip of the chisel, it’s just a shortening of Mistress by a stonecutter trying to save space on the already crowded slab.

The "S" is superscripted to the right of the "M" at the end of the second line of text.   The rest of the history of the term is discussed at the link, which concludes "This confusion of usage simply continues the long tradition of women’s titles indicating, masking, or ignoring age or marital status, providing proof that while language planners can consciously put a logical, “preferred,” or politically-motivated form into play, language users will either adopt or ignore those recommendations, or adjust them in unforeseen ways. Instead of following prescriptions, we twist them, invent our own expressions, or reshape existing ones, all to fit our ever-changing contexts and needs."