I can sympathize with the Titanic steering error 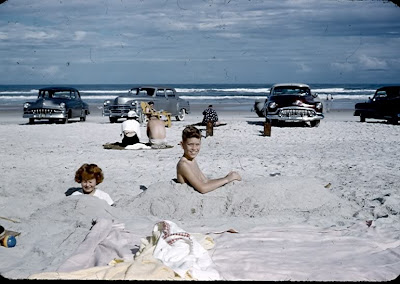 Word came this week that one reason the Titanic struck the iceberg was a steering error:


The error... happened because at the time seagoing was undergoing enormous upheaval because of the conversion from sail to steam ships.

The change meant there were two different steering systems and different commands attached to them. Some of the crew on the Titanic were used to the archaic Tiller Orders associated with sailing ships and some to the more modern Rudder Orders.

Crucially, the two steering systems were the complete opposite of one another.  So a command to turn "hard a starboard" meant turn the wheel right under the Tiller system and left under the Rudder.

More details at the Telegraph and at the New York Times.  Now for my personal context...

In the late 1950s my family went to Florida for a winter vacation and visited the Daytona Beach area.  In those days it was permissible to drive one's car on the beach [?is that still true?].  Because the car was not on a highway, my father decided it would be o.k. for me to steer the car while sitting on his lap.  As we zipped down the beach, he told me we were going to get too close to an ice-cream vendor's shack, and told me to turn steer toward the left.

At about seven years of age, I had no experience steering cars, but plenty of experience steering a boat (those of you who grew up in the upper Midwest will understand...).  The boats we rented at the lake were 16' wooden boats with 7.5 horsepower Evinrude outboard motors.  Because it was a rear-mounted outboard,  to turn the boat to the left, you pushed the tiller to the right.

And that's what I did with the car, turning the steering wheel to the right.  Dad fortunately still had control of the brakes.  I would have forgotten all about the incident, but was reminded of it on many occasions as I grew older.