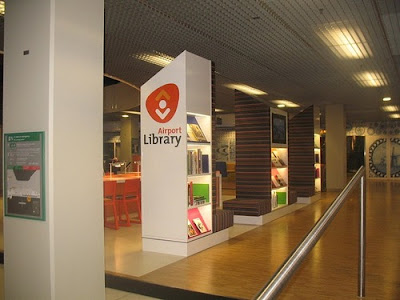 The photo above was taken in the Amsterdam airport.  "You can just grab any book you want and read. From what I can tell they work on the honor system..."

It's been a while since I've flown, so I don't know if this is feature is in other airports.  Do you read the book there, or can you take it on your flight?  I'm reminded of a curiosity I noticed at a medical clinic several weeks ago.  In the outpatient waiting room there were the usual variety of (uninteresting) magazines.  And a 1000-piece jigsaw puzzle.  I thought "this can't be a good sign..."

Found at Camille Reads, via Librarianista.

Addendum Sept 6:  Info supplied by one of our anonymous readers:


Amsterdam Schiphol Airport has partnered with the Dutch Public Libraries to open the world’s first airport library.  The library is just past passport control, on Holland Boulevard, and offers passengers waiting for a flight a place to read books in 29 different languages, listen to music, watch films and download material free of charge.

This from an airport that already offers travelers a great collection of art, a casino, a seafood bar, a chocolate bar, a fun forest for kids, a branch of the Rijksmuseum and lots more.

Update: Not wishing to fall behind TYWKIWDBI, the New York Times posted an article about the Schiphol airport library this week:


Opened with little fanfare over the summer, the library — the first ever at a major international airport — has 1,200 books in more than two dozen languages, all by Dutch authors or on subjects relating to the country’s history and culture...

There are 18 million passengers a year that only transfer through Schiphol... their layovers, he said, averaged somewhere between five and seven hours. “Most of these people never leave the airport, so they don’t see anything of Holland.”

The library also is equipped with nine Apple iPads loaded with multimedia content, including photos and videos, that is likewise devoted to the theme of Dutch culture...

...a library that employs no permanent staff and whose only effort to discourage theft is a sticker on the cover of each book identifying it as part of the Airport Library collection.