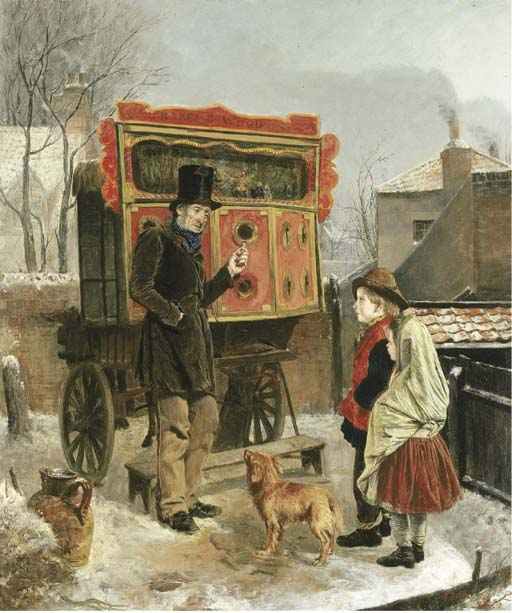 
This painting shows a form of street entertainment which appealed to the innate curiosity of children and adults alike. On the walls and back of the peepshow were painted events from history, novels and plays such as Napoleon's Return from Elba, Napoleon at Waterloo, The Death of Lord Nelson, The Forty Thieves, The Devil and Doctor Faustus or The Queen embarking to start for Scotland, from the Dockyard at Woolwich. The arrival of such travelling showmen generated considerable excitement, and according to Henry Mayhew who interviewed one such performer, in good weather they might earn three or four shillings per day (London Labour and the London Poor, 1861).

In this work, the children are contemplating viewing The Babes in the Wood, a popular yet tragic English ballad which was popular both in the operatic and literary traditions. Scores of illustrations depicting this tale appeared between 1800 and 1870, including Lady Waterford's 1849 edition of The Babes in the Wood. The children are understandably cautious and hesitant, even the dog appears to be wary of the colourful box and its hidden spectacles.

Found at Victorian/Edwardian Paintings, which has become one of my favorite art blogs, because unlike many others, Mr. Brown takes the time to include some biographical information on the painters, and even more importantly, the context of the subject matter of the paintings, so I learn some history as well as something about art.