Photos of the ivory-billed woodpecker 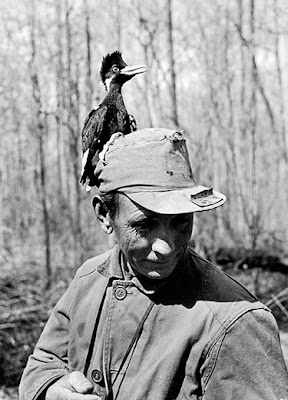 Most of you know the backstory about the rarest bird in the United States.  Here is an update -


Three years ago, I began working with Nancy Tanner on a book about her husband’s fieldwork. In June 2009, she discovered a faded manila envelope in the back of a drawer at her home in Knoxville, Tennessee. In it were some ivory-bill images. At her invitation, I started going through them.

One of the first things I found was a glassine envelope containing a 2 1/4- by 3 1/4-inch negative. Holding it up to the light, I realized it was of the nestling ivory-bill from the Singer Tract—an image I had never seen. I quickly found another negative, then another and another. My hands began to shake. It turned out that Tanner had taken not 6 pictures on that long-ago March 6, but 14. As a group, they show the young bird not frozen in time, but rather clambering over Kuhn like a cat on a scratching post, frightened but vital.


The rest of the story is in the September issue of Smithsonian magazine, or at the link, which has an additional half-dozen photos, which have never before been available to the public.