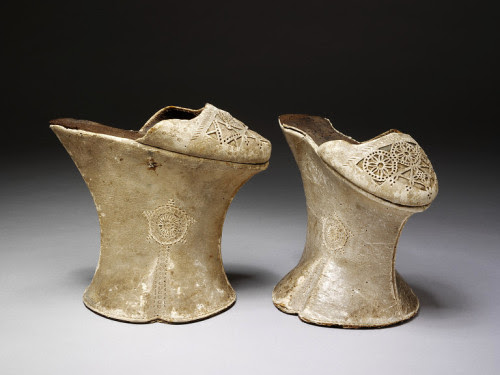 Several weeks ago I wrote a post about chopines, based on an intriguing photo with a long-distance view of the footwear.  This week I found the much better image above; the items are dated ~1600, and come from the collections of the Victoria and Albert Museum:


These chopines are made of pine-wood. The wood is covered in kid leather with punched decoration and figured silk underlay. This pair are fairly modest. More extreme versions were over 50 cms high. Chopines were based on the shoes worn at Turkish baths. They were first worn by Venetian prostitutes and fashionable Venetian aristocrats then adopted them. The chopine was originally a form of overshoe, which is why it has no back. Later versions could be worn as either overshoes or on their own.

Via A London Salamagundi.