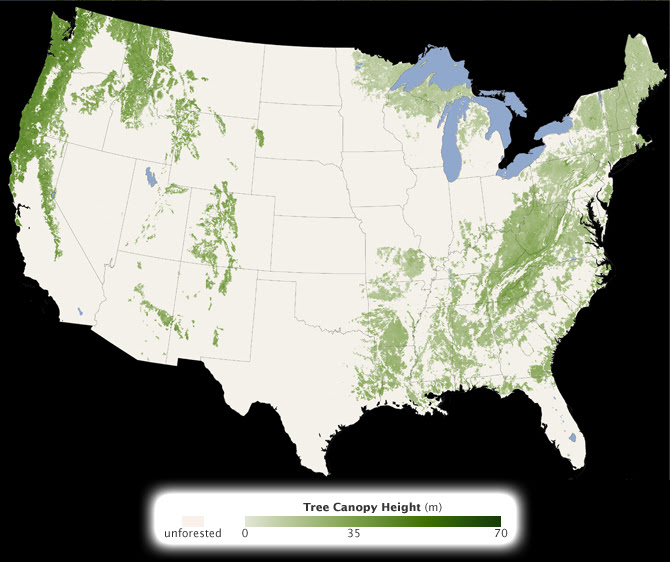 Using NASA satellite data, scientists have produced a first-of-its kind map that details the height of the world’s forests. Although there are other local- and regional-scale forest canopy maps, the new map is the first that spans the entire globe based on one uniform method...

The new map shows the world’s tallest forests clustered in the Pacific Northwest of North America and portions of Southeast Asia, while shorter forests are found in broad swaths across northern Canada and Eurasia. The map depicts average height over 5 square kilometers (1.9 square miles) regions), not the maximum heights that any one tree or small patch of trees might attain.

Temperate conifer forests -- which are extremely moist and contain massive trees such as Douglas fir, western hemlock, redwoods, and sequoias--have the tallest canopies, soaring easily above 40 meters (131 feet). In contrast, boreal forests dominated by spruce, fir, pine, and larch had canopies typically less than 20 meters (66 feet). Relatively undisturbed areas in tropical rain forests were about 25 meters (82 feet), roughly the same height as the oak, beeches, and birches of temperate broadleaf forests common in Europe and much of the United States...

Lefsky used data from a laser technology called LIDAR that’s capable of capturing vertical slices of surface features. It measures forest canopy height by shooting pulses of light at the surface and observing how much longer it takes for light to bounce back from the ground surface than from the top of the canopy. Since LIDAR can penetrate the top layer of forest canopy, it provides a fully-textured snapshot of the vertical structure of a forest -- something that no other scientific instrument can offer.

LIDAR is fantastic; I'll post later on its use for archeological discovery and mapping.  The map embedded above, from the NASA website, depicts the data for the United States.  A world map is also available.