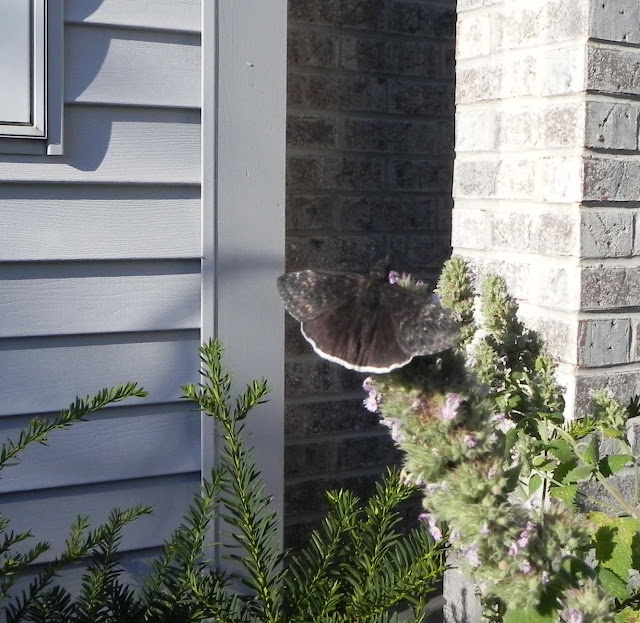 This evening I happened to glance out the front door of our house and saw a butterfly with which I was totally unfamiliar.  It was so far out of my comfort zone that I assumed it must be a dayflying moth, but when I got my binoculars I could see it had obvious butterfly antennae, so I grabbed my camera and headed out the door.

The butterfly was nectaring on a large stand of catnip (Nepeta cataria) right next to our front door.  Photography was difficult because it rested on individual blossoms only for a few seconds before moving to another, so it was difficult to capture good images.  It wasn't afraid of me; a few times I was able to get the lens within about 3" with a macro setting, but I had to snap blindly.  During the 5-10 minutes it spent nectaring I fired off about 25 photos, fully half of which were out of focus. 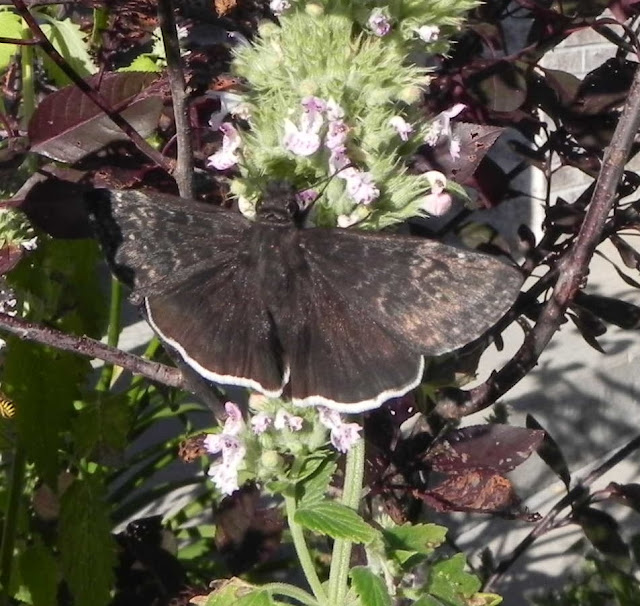 And the more I watched and photographed, the more I was convinced that this was a butterfly I had never seen.  There are several blackish-brown butterflies in this region, but the white stripe along the hindwing was unmistakeable - and totally unfamiliar. 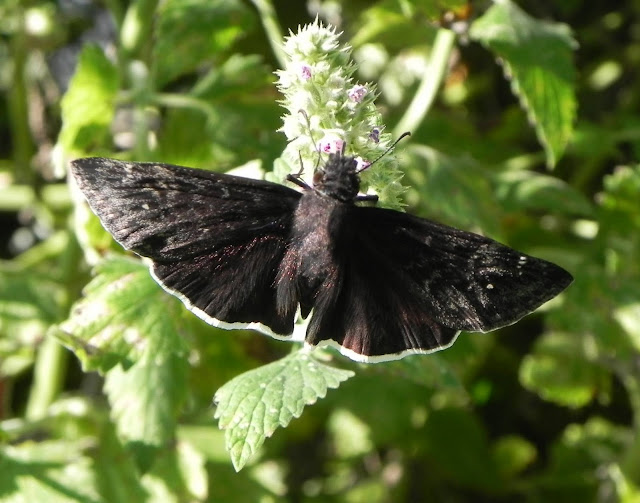 The frustration with digital cameras is that the autofocus feature doesn't necessarily chose the element in the field that is of the most interest, and in situations like this with a moving butterfly there is totally no time to adjust a manual focus mode.  This third photo is in better focus, but is shot slightly from above, so the body shape is a bit foreshortened.  (All these pix enlarge with a click)

When the little fellow left, I went in and checked my standard book reference (Butterflies of the North Woods, by Larry Weber).  It wasn't in there.  Double-checked.  Not there - and not even in the appendix listing "rare strays to the North Woods."

I finally found the answer at Mike Reese's Wisconsin Butterflies website, where there was a page devoted to the Funereal Duskywing.  It is described as a "very rare stray" to Wisconsin, only seen in this state five times - one of which was ten days ago in Milwaukee. 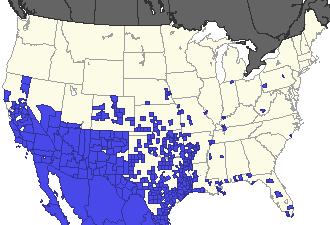 Perhaps the most definitive site on the web is Butterflies and Moths of North America.  Their distribution map of documented records for Erynnis funeralis shows that this member of the Skipper family is widely distributed in the American Southwest.  There are other duskywings with white stripes along the hindwing (False Duskywing, Mournful Duskywing, and Pacuvius Duskywing, so I'll need to submit this sighting for verification.

After discovering how rare this sighting was, I went back to the front steps and sat there with my camera and a thick novel and a glass of sangria and waited until dark for it to return, without any success.  You can bet that tomorrow afternoon/evening I'll be out there again hoping to get some better pictures.  Stay tuned.