College completion data for the U.S. 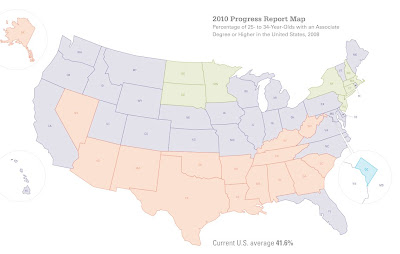 The United States has fallen from first to 12th in the share of adults ages 25 to 34 with postsecondary degrees, according to a new report from the College Board.

Canada is now the global leader in higher education among young adults, with 55.8 percent of that population holding an associate degree or better as of 2007, the year of the latest international ranking. The United States sits 11 places back, with 40.4 percent of young adults holding postsecondary credentials...

The United States ranks somewhat higher, sixth, among all nations when older adults are added to the equation, according to the report, which Caperton said would be the first of many annual reports charting progress toward the 2025 goal.

But the report focuses more heavily on younger adults, who are feared to be the first generation in the modern era that will be less well-educated than their parents.

I'm not sure I quite understand the data in the College Board's report.  The "State level pull-out map" (image above) seems to indicate that the national average is 41.6%, but that only 5 states and the District of Columbia are above that level.

I don't know whether to be distressed by the trend, because it's also not clear to me whether "postsecondary degrees" is limited to "college" grads.  I spent some years teaching at a vocational/technical school, and frankly I think the kids who graduated from there are probably contribute more to a well-running country than many of the dullards who were "college grads."