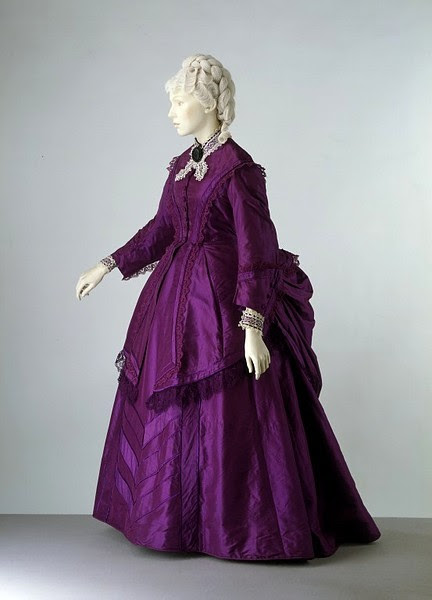 Dress | c. 1870-73
After I posted about a bright purple Victorian dress last week, one reader suggested I read the book Mauve, which I just got yesterday.   It'll have to wait until after I finish the Iain Pears' book that two other readers recommended.

In the meantime, here's another purple dress, with details not only re the dyes, but some revelations (for me) re bridal customs of the 1870s:


This dress was made of a silk dyed purple with aniline dye. The technology of dyeing fabrics was transformed in the mid-1850s when the British chemist William Perkin (1838-1907) discovered that dyes could be extracted from coal tar. These new aniline dyes became very fashionable. The first was ‘Perkin’s mauve’, followed by a variety of shades of purples and magentas, yellows, blues and pinks. These colours were much more intense than any available from the traditional natural dyes.

According to the donor, this dress was worn by his mother on her wedding day. It could have been her ‘going away’ ensemble, or it could have been the dress she wore for the actual ceremony. Because weddings in those days took place in the mornings, daywear with long sleeves and high necks was the acceptable style. For her wedding a woman often wore a coloured dress that would serve as a ‘best dress’ for years to come.

I am nothing if not pragmatic, and in my view the Victorian approach of having the wedding dress later become a "best dress" is by several log powers more sensible than the current custom of spending a fortune on a white dress that will never be worn again in order to proclaim a virginity that probably doesn't exist anyway.

Image and text from Defunct Fashion, via.