The devastation caused by bottom trawling 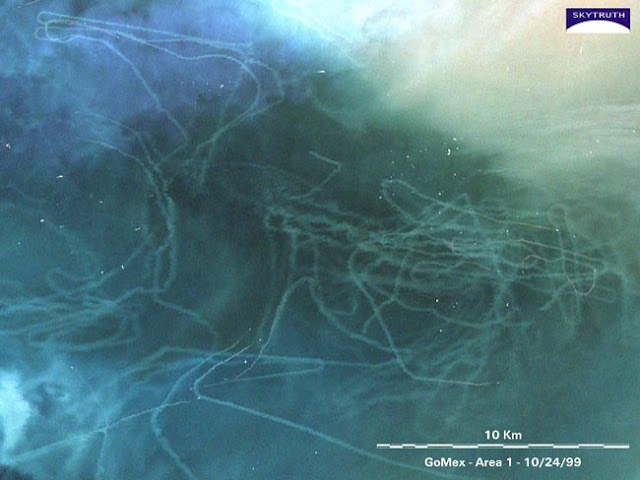 Detail from Landsat satellite image, Gulf of Mexico, taken on 10/24/99. Individual vessels can be seen as bright spots at end of sediment trails. Other bright spots are fixed oil and gas production platforms. One sediment trail can be traced for 27 km. Credit: SkyTruth

For over two years I've been meaning to write a post decrying the use of "bottom trawling" as a fishing technique.  In 2008 I bookmarked an article at LiveScience (via), which included the photo above showing the effects visible from satellite imaging:


As nets are dragged across the seafloor, they can crush coral reefs, drag boulders across the bottom, and trap fish and animals not intended to be caught, called bycatch. All this activity stirs up sediments from the seafloor, which create the persistent plumes in the wake of the fishing ships.
Watling and his colleagues say that the plumes visible in satellite images are likely just the "tip of the iceberg" as most trawling is in waters that are deep enough that the plume remains hidden by the water above.

Tonight I discovered that the deleterious effects of bottom trawling were first noted (and first protested) in... 1376!  This text comes from a petition to King Edward III:


“The commons petition the King, complaining that where in creeks and havens of the sea there used to be plenteous fishing, to the profit of the Kingdom, certain fishermen, for several years past have subtily contrived an instrument called the “wondyrechaun” made in the manner of an oyster dredge, but which is considerably longer, upon which instrument is attached a net so close meshed that no fish, be it ever so small which enters therein can escape, but must stay and be taken.

And that the great and long iron of the wondyrechaun runs so heavily and hardly over the ground when fishing that it destroys the flowers of the land below water there, and also the spat of oysters, mussels and other fish upon which the great fish are accustomed to be fed and nourished. By which instrument in many places, the fishermen take such quantity of small fish that they do not know what to do with them; and that they feed and fat their pigs with them, to the great damage of the commons of the realm and the destruction of the fisheries, and they pray for a remedy.”