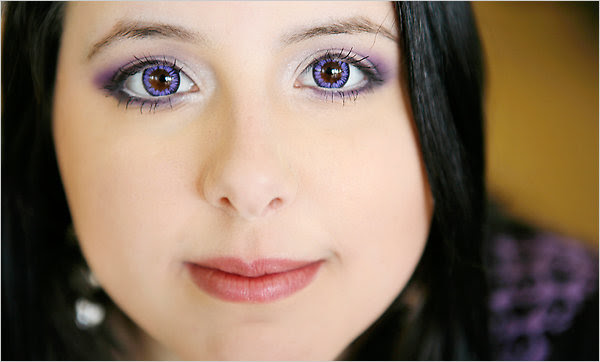 In the past year or so I've posted three articles on the use of cosmetic contact lenses in Goth fashion (here, here, and here), and last month I posted a curious example of cosmetic enhancement, which I learned (from comments on the post) was a result of using circle lenses.

This past week, the New York Times posted an article on the same topic.  Some excerpts:


“I’ve noticed a lot of girls in my town have started to wear them a lot,” said Melody Vue, a 16-year-old in Morganton, N.C., who owns 22 pairs and wears them regularly. She said her friends tended to wear circle lenses for their Facebook photos.

These lenses might be just another beauty fad if not for the facts that they are contraband and that eye doctors express grave concern over them. It is illegal in the United States to sell any contact lenses — corrective or cosmetic — without a prescription, and no major maker of contact lenses in the United States currently sells circle lenses. ..

The lenses give wearers a childlike, doe-eyed appearance. The look is characteristic of Japanese anime and is also popular in Korea. Fame-seekers there called “ulzzang girls” post cute but sexy head shots of themselves online, nearly always wearing circle lenses to accentuate their eyes. (“Ulzzang” means “best face” in Korean, but it is also shorthand for “pretty.”)

Dr. S. Barry Eiden, an optometrist in Deerfield, Ill., who is chairman of the contact lens and cornea section of the American Optometric Association, said that people selling circle lenses online “are encouraging the avoidance of professional care.” He warned that ill-fitting contact lenses could deprive the eye of oxygen and cause serious vision problems.

Nina Nguyen, a 19-year-old Rutgers student from Bridgewater, N.J., said she was wary at first. “Our eyes are precious,” she said. “I wasn’t going to put any type of thing in my eyes.”

But after she saw how many students at Rutgers had circle lenses — and the groundswell of users online — she relented. Now she describes herself as “a circle lens addict.”

“What made me comfortable is so many girls out there wearing them,” Ms. Nguyen said...

Ms. Vue was 14 when she begged her parents to get her first pair, she said. These days, however, she is having second thoughts about them — but not for health or safety reasons.

Circle lenses have just grown too popular, Ms. Vue said. “It kind of makes me not want to wear them anymore, because everyone is wearing them,” she said.