The antiquity of "Snakes and Ladders" 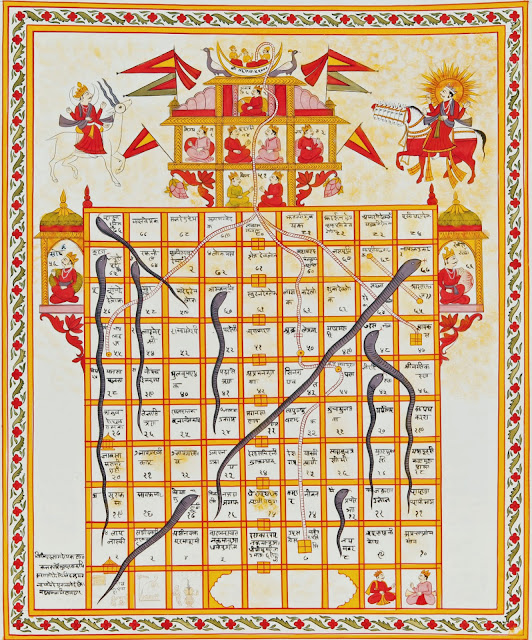 According to Veda, the game was created by the 13th century poet saint Gyandev.


In the original game square 12 was faith, 51 was Reliability, 57 was Generosity, 76 was Knowledge, and 78 was Asceticism. These were the squares where the ladder was found. Square 41 was for Disobedience, 44 for Arrogance, 49 for Vulgarity, 52 for Theft, 58 for Lying, 62 for Drunkenness, 69 for Debt, 84 for Anger, 92 for Greed, 95 for Pride, 73 for Murder and 99 for Lust. These were the squares where the snake was found. The Square 100 represented Nirvana or Moksha.


Snakes and Ladders originated in India as part of a family of dice board games that included Gyan chauper and pachisi (present-day Ludo and Parcheesi). The game made its way to England and was sold as "Snakes and Ladders", then the basic concept was introduced in the United States as Chutes and Ladders by game pioneer Milton Bradley in 1943.

The game was popular in ancient India by the name Moksha Patam. It was also associated with traditional Hindu philosophy contrasting karma and kama, or destiny and desire. It emphasized destiny, as opposed to games such as pachisi, which focused on life as a mixture of skill (free will) and luck. The underlying ideals of the game inspired a version introduced in Victorian England in 1892. The game has also been interpreted and used as a tool for teaching the effects of good deeds versus bad. The board was covered with symbolic images, the top featuring gods, angels, and majestic beings, while the rest of the board was covered with pictures of animals, flowers and people.

The ladders represented virtues such as generosity, faith, and humility, while the snakes represented vices such as lust, anger, murder, and theft. The morality lesson of the game was that a person can attain salvation (Moksha) through doing good, whereas by doing evil one will inherit rebirth to lower forms of life. The number of ladders was less than the number of snakes as a reminder that a path of good is much more difficult to tread than a path of sins. Presumably, reaching the last square (number 100) represented the attainment of Moksha (spiritual liberation).

When the game was brought to England, the Indian virtues and vices were replaced by English ones in hopes of better reflecting Victorian doctrines of morality. Squares of Fulfillment, Grace and Success were accessible by ladders of Thrift, Penitence and Industry and snakes of Indulgence, Disobedience and Indolence caused one to end up in Illness, Disgrace and Poverty. While the Indian version of the game had snakes outnumbering ladders, the English counterpart was more forgiving as it contained each in the same amount. This concept of equality signifies the cultural ideal that for every sin one commits, there exists another chance at redemption.

Interesting that success in the game as originally designed depended entirely on luck (roll of dice) with no apparent skills or strategy involved; perhaps that's part of the karma lesson.  AFAIK, the American version didn't incorporate any virtues or sins - it was more like random good and bad luck.  I may be misremembering.  But I certainly didn't know it was an ancient game.