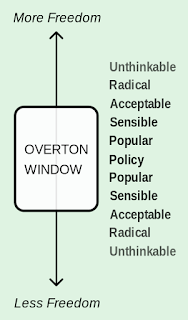 The Overton window is the range of ideas tolerated in public discourse, also known as the window of discourse. The term is named after political scientist Joseph P. Overton, who claimed that an idea's political viability depends mainly on whether it falls within a range acceptable to the public, rather than on politicians' individual preferences. According to Overton, the window contains the range of policies that a politician can recommend without appearing too extreme to gain or keep public office in the current climate of public opinion...

The Overton window is an approach to identifying which ideas define the domain of acceptability within a democracy's possible governmental policies. Proponents of policies outside the window seek to convince or persuade the public in order to move and/or expand the window. Proponents of current policies, or similar ones, within the window seek to convince people that policies outside it should be deemed unacceptable.  [cf also Hallin's spheres]

I had to look up the term (it was unfamiliar to me), because it was featured in a Rolling Stone interview with Alexandria Ocasio-Cortez.  Herewith some excerpts:


But do you court the controversy? Are you trying to engage in a dialogue where you are going toe-to-toe with Trump?I do think that we’ve been taking it too much. I think we’ve been tolerating the intolerable. And I remember, you know, just being a constituent, like, “Where’s the fight back on some of these issues?” What the president is trying to do is undermine truth itself. Just because I’m pushing back on reporters calling women unlikable doesn’t mean that I think their outlet itself is “fake.” There’s a huge difference between checking a narrative and checking an actual institution. That’s how you get climate deniers being treated just as seriously as venerable scientists.


You have only been here about a week or so, but have you had any conversations with Republicans about why they stick by him?Well, in the Republican Party, there’s a hostage situation going on. There are a lot of Republicans that know what the right thing to do is — not just on impeachment but on a wide range of issues — and they refuse to speak up.

Wouldn’t you rather have Republicans in office who know what the right thing is behind closed doors versus those people speaking up and losing their seats to people who are truly in agreement with Trump?The problem is that if they vote the same way, what does it matter? I don’t care what’s in your heart if how you are voting is the same as someone who is actually racist. At the end of the day, they think that their intentions are gonna save them, but the actual decisions you make matter. I am tired of people saying, “I’m gonna vote the same way as bigots, but I don’t share the ideology of bigots.” Well, you share the action and the agenda of bigots. We need to hold that accountable.

How much of what you’re talking about is trying to move the Overton window [the range of ideas accepted in public discourse] so that Democrats can compete with the way Republicans have moved it?A huge part of my agenda is to move the Overton window, because it’s a strategic position. I’m a first-term freshman in an institution that works by seniority. Procedurally, it is kind of like high school. You’re the new kid on the block. So, as a freshman, you have to look at the tools available to you, and in my first term, if we have the opportunity to frame the debate, then that is one of the ways to have the most power. If I’m here for four days, then the most powerful thing I can do is to create a national debate on marginal tax rates on the rich.

Do you worry that [Pelosi]’s been in politics so long that she will be too quick to compromise?I do think that as a party we compromise too much. I don’t think it’s necessarily all on her, because she can only push as much as she can coalition-build. That’s why I see a special responsibility in my role in kind of shifting the conversation, so that all the members feel a little bit more pressure, because we’re amplifying what voters already feel. I was running in a district that was deep blue, and the representation that we were getting was not as progressive as the actual electorate. When [congresspeople] start feeling more of that conversation coming from their districts, they’ll have more liberty to move, which will then give the speaker more liberty to compromise less and push harder. Especially when it comes to the environment, but also on a wide range of issues.

Do you worry about splintering the party, this idea that you’re not just trolling Republicans, you’re also trolling Democrats? You’re doing all kinds of trolling! [Laughs]Well, I don’t worry about splintering the party, but as I’ve said in the past, we can’t just be a party of the most basic rights. It shouldn’t be a political statement to say we should all be treated equally. The fact that that is partisan upsets me. I believe that both parties need to be on the same page when it comes to racial justice, queer rights, marriage equality, all of it. These should not be partisan issues, they should be universal rights. And so we need to champion those things, but we need to go a lot further. Especially when it comes to expanding our rights to economic dignity.

What do you think you know that the old guard doesn’t?One of the things that I bring to the table is a visceral understanding that people under 40 have been shaped by an entirely different set of events. We’ve literally grown up in different Americas. They were shaped by a Cold War America, a post-World War II America; and we are an Iraq War America, a 9/11 America, a hyper-capitalism-has-never-worked-for-us, Great Recession America. People are used to talking about millennials as if we’re teenagers. We’re in our thirties now. We’re raising kids and getting married and having families, and we have mortgages and student-loan debt. It’s important that [Congress is] in touch. People tend to interpret this as me railing against older people and being ageist. But that’s not what this is about. It’s a problem of representation. We don’t have enough intergenerational representation. We largely have one generation. That’s not to say that one generation should be out of power, it’s that others should be here as well.

Do you still have student-loan debt?Of course I do, yeah! I’m 29 years old.

Via Boing-Boing, which described her as "tearing the Overton window out of its frame."

The more I read about this lady the more I like her.  I found this in a HuffPost column yesterday:

One advantage Ocasio-Cortez has over some colleagues is that she consistently attends even the most mundane committee hearings, since she does not spend any of her day calling donors for money. Her online presence is strong enough that she has chosen to rely on it exclusively to raise contributions in smaller increments.

I realize the readership of TYWKIWDBI is diverse (and worldwide, often not interested in U.S. politics), so I think it's only fair that I start treating AOC the way I do Trump - sequestering the bulk (tho not all) of relevant posts to intermittent clusters that can be browsed by those interested, and ignored by those opposed.  I have posted a half-dozen Trump Clumps.  So now I'll start aggregating the AOC material into "AOC potpourris."  And Bernie Sanders too (if I can come up with a good term for those clusters...)