Mass incarceration in the United States 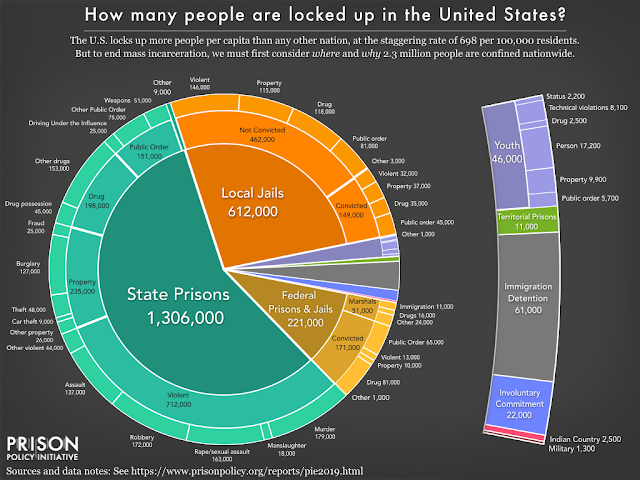 The American criminal justice system holds almost 2.3 million people in 1,719 state prisons, 109 federal prisons, 1,772 juvenile correctional facilities, 3,163 local jails, and 80 Indian Country jails as well as in military prisons, immigration detention facilities, civil commitment centers, state psychiatric hospitals, and prisons in the U.S. territories. This report provides a detailed look at where and why people are locked up in the U.S., and dispels some modern myths to focus attention on the real drivers of mass incarceration.

More information at the Prison Policy Initiative, including discussion of these five myths:

The second myth: Private prisons are the corrupt heart of mass incarceration

The third myth: Prisons are “factories behind fences” that exist to provide companies with a huge slave labor force

The fourth myth: Expanding community supervision is the best way to reduce incarceration

The fifth myth: People in prison for violent or sexual crimes are too dangerous to be release