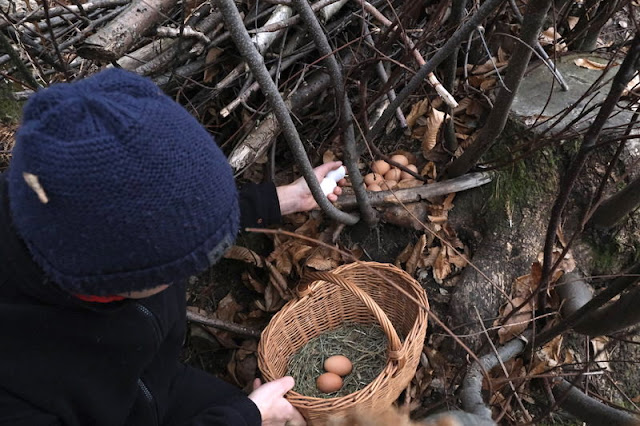 From the always-interesting Atlas Obscura:


Massimo Rapella, a 48-year-old chicken farmer from northern Italy, is helping chickens rediscover their wild side. Since 2009, Rapella and his wife Elisabetta have been keeping an estimated 2,100 hens in a patch of pristine Alpine forest near Sondrio, in the heart of the Valtellina valley...

Shortly after relocating, Rapella and his wife started keeping a few chickens to provide eggs for their own consumption. But soon enough they noticed some unexpected behavior from their flock. “Our chickens liked roaming around the nearby woods,” Rapella explains. “So I encouraged them to venture out and lay eggs in the wild.”

A few months later, Rapella saw that the birds looked healthier—with shiny feathers and bright-colored wattles—and that their eggs had a fuller taste. “I started wondering if I could take on more chickens and create an ‘Alpine egg’ to sell in local markets,” he says. Today, he sells his uovo di selva, or egg of the woods, to about 400 direct consumers and 40 restaurants...

Most domestic chickens today would not find themselves at home in a forest: at least, not immediately. “The first large batch of chickens I took in looked very lost,” Rapella says. “They had never seen a tree nor a bug in their life, and they were scared of snow.”..

“White birds really stand out to predators,” Clauer says. Rapella keeps two different breeds of chicken: Hy-Line brown hens and the easy-to-spot white Leghorns. While he once lost the occasional chicken, now he relies on a double fence and two trained Maremma sheepdogs to keep badgers, martens (a weasel-like carnivore), foxes, and buzzards at bay.

Rapella’s chickens lay eggs almost every day, like any domesticated chicken, but they do so in the woods. “They like natural nests offered by tree roots or branches,” he says. “Usually when you spot a cranny with some leaves, you know there could be eggs.” Once a hen finds her favorite nesting spot, she goes back to it for each subsequent laying, making Rapella’s egg-hunting easier. Together with two employees, he gathers an estimated 1,000 eggs every morning.

His uovo di selva tastes like egg, but concentrated. There’s more flavor to it, and also more protein, due to the bug-filled diet of the chickens. As a result, when chefs whip the whites from Rapella’s protein-rich eggs, they get three times the volume. The egg yolk can even change with the seasons...