This symbol is now 50 years old 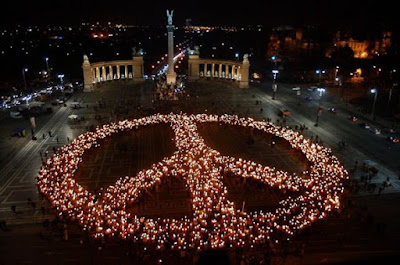 Originally designed in 1958, the "peace symbol" combines the semaphore signals for the letters "N" and "D," representing "nuclear disarmament." First popularized by the Campaign for Nuclear Disarmement in Britain, it later became a generalized symbol for peace. Wikipedia offers the following re misinterpretations of the symbol:

…spurious alternative interpretations, ranging from… "The footprint of the American Chicken" … to a number of occult meanings, such as an upside down crucifix with the arms broken downward, suggesting the way that St. Peter was martyred… Others have claimed that the symbol resembles a medieval sign known as "Nero's Cross" that represents Satanism… As well, a commonly repeated conjecture during the 1960s was that it was an antichrist symbol... Gerald Holtom's explanation of the genesis of the symbol and his first drawings of it, however, do not support those interpretations… The peace symbol was also believed by some to represent a swept-wing bomber, the type that would be used to deliver a nuclear weapon. Ironically, a nearly identical symbol was used by the Nazi German 3rd Panzer Division during World War II.

Image credit to the Guardian's photoessay.