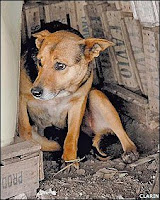 "An eight-year-old dog has touched the hearts of Argentines by saving the life of an abandoned baby, placing the girl safely alongside her own new puppies.

[The baby] was born prematurely to a 14-year-old girl in a shanty town outside the capital, Buenos Aires. The mother is said to have panicked and abandoned the baby in a field, surrounded by wooden boxes and rubbish.

Then along came La China, the dog which somehow picked up the baby and carried her 50m to place the baby alongside her own puppies. The dog's owner heard the child crying and found her covered with a rag.

The baby, weighing 4kg (8lb 13oz), had some slight injuries, but no bite marks. The owner called the police and the child is now being looked after by the authorities, while a decision is taken about her future. The frightened mother appeared shortly after her baby was found.

The Argentine media has descended on the shanty town, talking of "the Argentine Romulus and Remus", the founders of Rome, abandoned as babies and rescued by a wolf, nearly 3,000 years ago."