Child's retinoblastoma spotted in an email 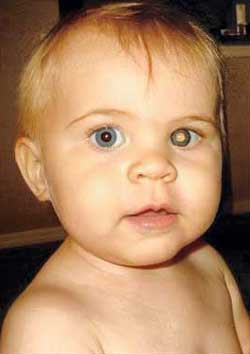 Madeleine Robb, from Stretford, who has never met her pen pal, spotted a shadow behind one of Rowan Santos's eyes on pictures from her first birthday. She then e-mailed her mother Megan advising her to get medical help.

The two mothers became friends on an internet messageboard after their children were born on the same day. But when Mrs Robb saw the pictures she said she knew something was not right.

Megan Santos took her to the doctor the same day and her condition was diagnosed. The toddler will still lose her eye, but doctors have said her chances of survival are much greater thanks to the early diagnosis.

Text and image from Nothing to do with Arbroath.