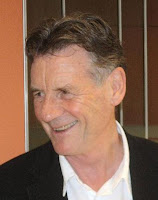 TYWKIWDBI enthusiastically supports the Palin candidacy for the Vice Presidency of the United States.

He has vast international experience, having travelled pole to pole and around the world. In recognition of his travels, he has two British trains (and an asteroid) named after him.

He has a practical knowledge of economic problems, as evidenced by his running of a cheese shop and selling Dead Parrots.

He knows how to deal with terrorists (the Spanish Inquisition) and has even tortured old ladies with comfy chairs.

And now he's scheduled to play the role of Don Quixote - a excellent preparation for the position of Commander-in-Chief.