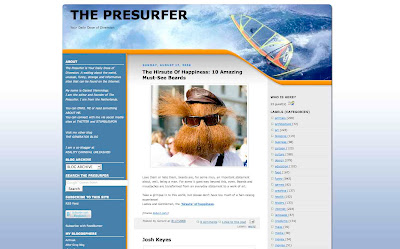 I'm starting a series of entries on blogs that I recommend to the TYWKIWDBI community.

The first one I'll feature is The Presurfer. Its mission statement is simply stated and not much different from that of TYWKIWDBI:


The Presurfer is Your Daily Dose of Diversion. A weblog about the weird, unusual, funny, strange and informative sites that can be found on the Internet.


The Presurfer was created by Gerard Vlemmings in the Netherlands in 2000. I discovered the site a couple years later when it began to receive awards and was featured in MacUser or MacWorld or MacSomething. I've visited on a daily basis for years.

The Presurfer's Technorati rating in the blogosphere is 6,360 (out of I think 12,000,000 blogs), which places him in the stratosphere of influence and prestige. By contrast, TYWKIWDBI is ranked at 490,000 or thereabouts.

I offer this recommendation not because I think my comments will improve his traffic (my 200 visitors/day will not impact his several thousand/day), but because if you like the content, tone, and attitude of TYWKIWDBI you will probably enjoy the Presurfer.

I'll offer other recommendations in the weeks/months to come. Those who want a head start can take a peek at Neatorama, J-Walk, and Nothing to do with Arbroath for starters.