Is this a new DaVinci drawing? 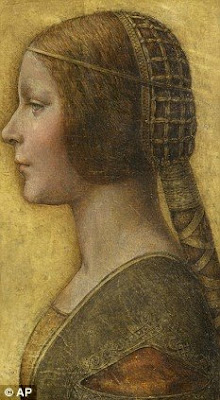 The Mail Online today featured a story on a drawing that may be attributable to Leonardo DaVinci. It was "commissioned by a female Italian aristocrat to show to potential suitors" in a sort of 15th-century equivalent of a Facebook page.

Known as Nuptial Portrait of a Young Woman, it was sold for £10,000 in 1998 after being attributed to a German artist.

However, experts say it is looking 'more and more like a Leonardo work'. This would push its value up as high as £100million...

Based on its style, the portrait is thought to date to between 1485 and 1490, when Da Vinci was living in Milan.

Mr Vezzosi believes it shows the Milanese aristocrat Bianca Maria Sforza shortly before her marriage to Maximilian I, the Holy Roman Emperor.

However, he said the work needs further investigation before it is fully accepted as authentic.

If this happens, it will be the most important advance in Da Vinci studies since the Lady With An Ermine portrait was attributed to the artist in the 19th century.