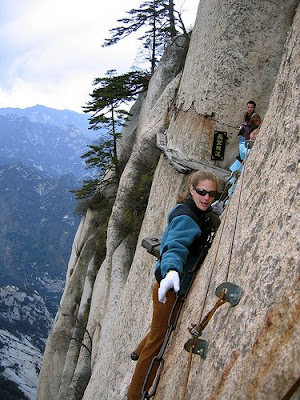 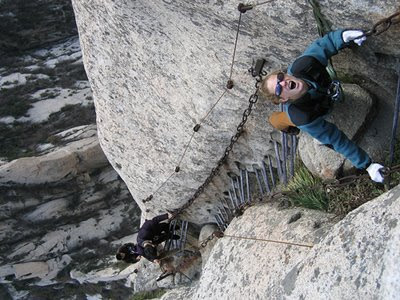 Four months ago I blogged a video of the scariest hiking trail I had seen on the web:

El Caminito del Rey (The King's pathway, often shortened to El Camino del Rey) is a walkway, now fallen into disrepair, pinned along the steep walls of a narrow gorge in El Chorro, near Alora in Spain...

Now I've found a scarier one. The Huashan Trail in Shaanxi province:

Known as the “Number One Precipitous Mountain under Heaven”, Mount Huashan proudly lives up to its reputation through its incredibly dangerous hiking trail... The most perilous part of the Huashan Trail is considered to be the “Changong Zhandao” a 13 feet long, 1 foot wide plank path along a vertical cliff, where just one false step means falling in the abyss below. There is also a chain around the cliff so, if you plan to take this path, pack a mountain-climbing harness and strap yourself to the chain.

That's the top image. The bottom one shows a vertical climb:

The steep, practically vertical Heaven Stairs are no breeze to climb either, if someone were to slip and tumble down the people behind him would be in terrible danger as well, because the staircase is very narrow.

There are some videos of the easy and hard parts on YouTube.

Addendum: an excellent view of the bottom of the stairs here.