Minnesota will beat Ohio State in football this year 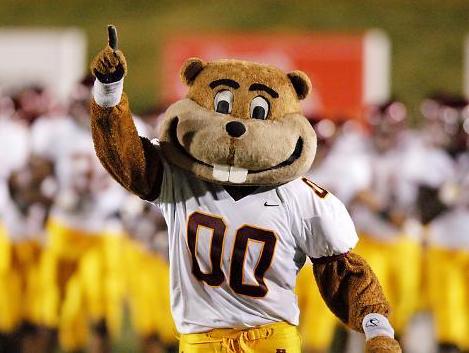 Tonight the Big Ten football season features the Minnesota Gophers hosting Ohio State on national television, in what every analyst and pundit thinks will be an easy victory for Ohio State;  oddsmakers list Minnesota as two-touchdown underdogs.  History is on the side of Ohio State.  Since 1965, the Gophers have only 3 wins vs. 39 losses against Ohio State and have only beaten OSU once since 1981 (forty years ago).
Ohio State is a traditional powerhouse in football; this year analysts rate the Buckeyes offensive line No. 1 in the nation and their defensive line No. 2."  Conversely, Minnesota is dismissed out of hand, in part because of a dismal 3-4 record during last year's covid-ravaged season.  This past spring, ESPN ranked the Gophers 9th in the Big Ten (out of 14 teams).  More recently ESPN's Football Power Index predicts Minnesota to have only a 3-6 record in the Big Ten. Even the hometown StarTribune predicts the Gophers to finish only 3rd in the West Division of the Big Ten (behind Wisconsin and Iowa).
Ohio State is ranked 4th nationally in pre-season polls.  Minnesota is unranked in those polls.  The OSU coach has never lost to any Big Ten team (21-0) in the past two seasons, including conference championship games.  Every analyst will point out that Ohio State has more talented personnel on their teams.
The reason I predict a Minnesota upset this year is because the game is the first one of the year - with no prior nonconference games.  Under these circumstances a decided edge goes to the team with the most experienced players.  In the 2018-19 season the Gophers were the youngest team in college football.  Fast-forward to 2021 and add the coronavirus pandemic, and things are different.  The offense will be returning 10 of 11 starters, as will the defense, because...

"With athletic director Mark Coyle's blessing, the coaches invited every senior from last season to return using the NCAA-approved extra year of eligibility due to the pandemic. They also welcomed back linemen returning from injury and/or opt-out seasons. The result is the oldest offensive line in the history of college football." 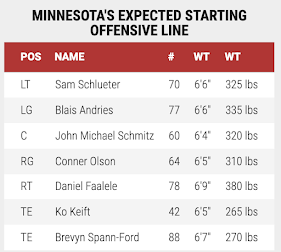 The five starting offensive linemen include one senior and four redshirt seniors (fifth-year students).  Those five players have been in the starting lineup for a combined 140 games.  Their average age is 23 (about the same as the NFL Minnesota Vikings). They know how to work together to open holes for Mohamed Ibrahim - without question the best running back in the Big Ten (preseason All-America first team).  The best analysis of Minnesota's offensive line I've seen (with gifs) is at an Ohio State website (for football geeks only).  The Gopher offensive line is also huge in size (see the table) - again, not much different from the Vikings.
In addition to experience, the team has depth:

The NCAA's eligibility waiver makes it permissible for football teams to exceed the 85-scholarship limit. Athletic director Mark Coyle allowed Fleck to invite back his seniors, which puts the roster around 95 players in spring practice. Typically, that number is 60 to 65.

That depth gives the team the luxury of rotating players into positions, keeping them fresh throughout the game.
The Gophers' weakness is their defense, but they bolstered their lineup after last year with two graduates from other colleges (Clemson and North Carolina State), and the defense also has a seventh-year senior who played four years at Notre Dame before transferring to Minnesota [not an "Animal House" scenario - he graduated from Notre Dame and has a Masters degree from Minnesota].  The transfer from Clemson already has two bachelor's degrees but elected to use the pandemic extended-eligibility rule to play a sixth season of football (and get a third bachelor's degree).
Gophers are opening the season at home on nationally-broadcast television.  The stadium will be packed.  They even have new, special "blackout" uniforms.
Ohio State lost many players to the NFL, including notably quarterback Justin Fields.  Their starting quarterback has never played a college game; the two backups are also freshmen.  The OSU defense doesn't have any linebackers who have started even a single game (linebackers are a traditional strength at Ohio State).
Bottom line - if your state allows betting on college football games, this is a great opportunity to reinvest that money you've been saving up for your children's and grandchildren's education and bet on Minnesota to beat the spread (13.5 points).  Easy money.  You can thank me later.
Result: Ohio State won by two touchdowns (14 points) - exactly as predicted. *sigh*
A Minnesota-based analyst likened the game to a contest between a race car and a bulldozer.  The race car won.
Addendum:  During the game, Mohamed Ibrahim's Achilles tendon snapped (this gif shows the gastrocnemius retracting upward into the calf).  Season over for him.