There should be more butterflies (updated) 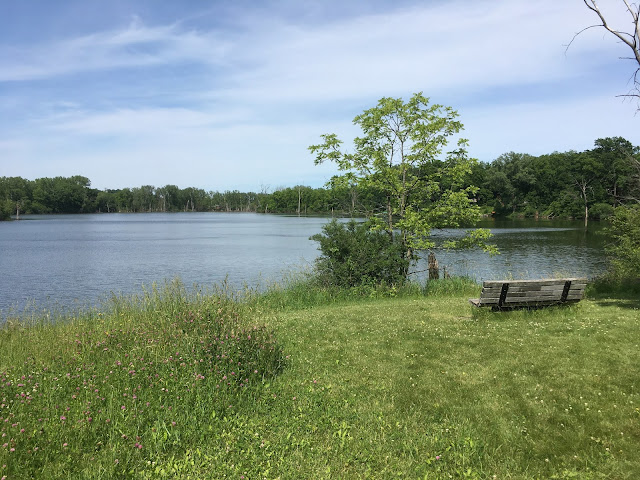 At our latitude, when nature offers you blue skies, light breezes, and temperatures in the 70s, you take advantage of this blessing by heading outdoors.  Yesterday I hiked at Goose Lake, near Verona, Wisconsin. 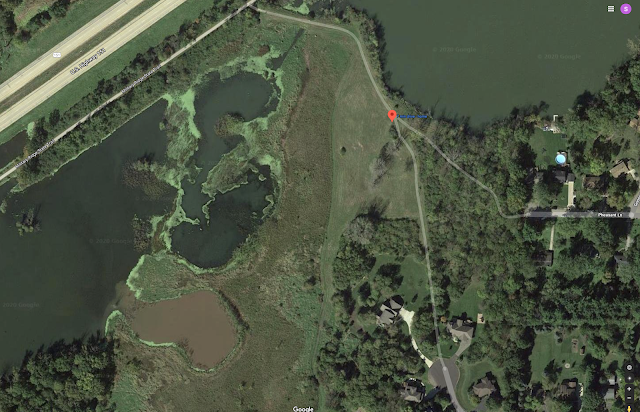 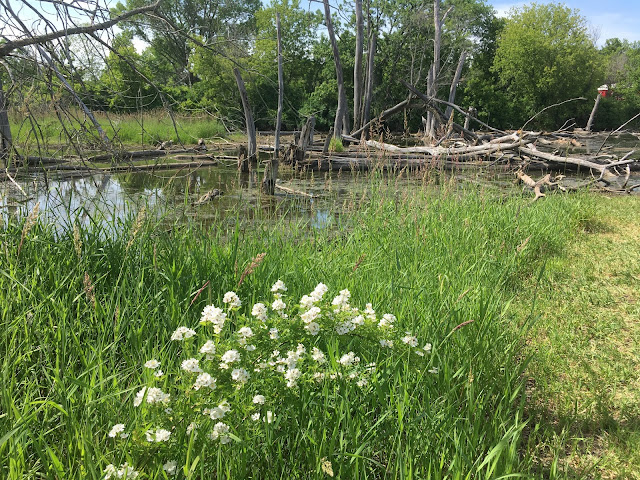 TBH, the park exists not so much because of urban planning and civic-mindedness, but because in modern suburbia there needs to be somewhere for stormwater to collect.  This park is at a low elevation and is downslope from a variety of subdivisions and business centers, so not even aggressive developers wanted to build here, and it remains public land.

One feature of stormwater-collecting areas is shown above and below.  When the water level remains high, it smothers trees that are not adapted to having their feet wet for prolonged periods of time.  Thus the clusters of standing deadwood at the margins of the lake. 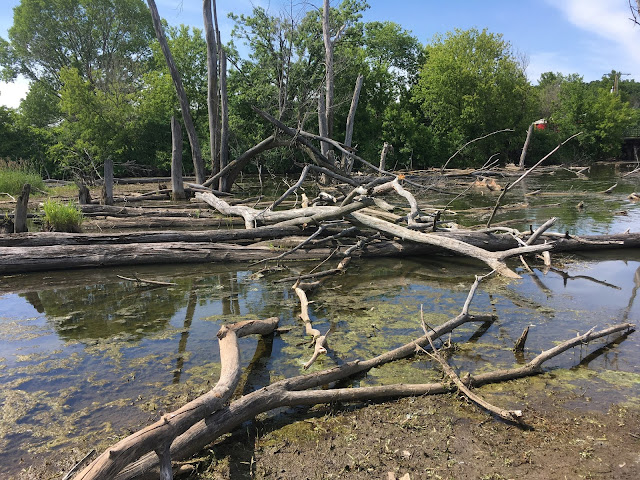 Standing deadwood is good habitat for beetles and woodpeckers, but I was here for butterflies, so I headed toward the open fields.  My walk took me from the viewpoint below to the edge of the pond in the far upper right corner of the photo. 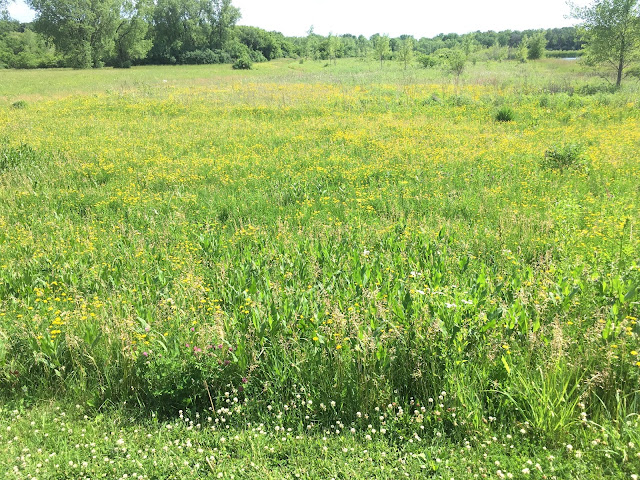 I stood watching this patch of flowering vegetation for a good 5 minutes, seeing no lepidoptera.  Nada.  There should have been Cabbage Whites at least, Sulphurs, Checkerspots, and some Monarchs or Swallowtails cruising past. 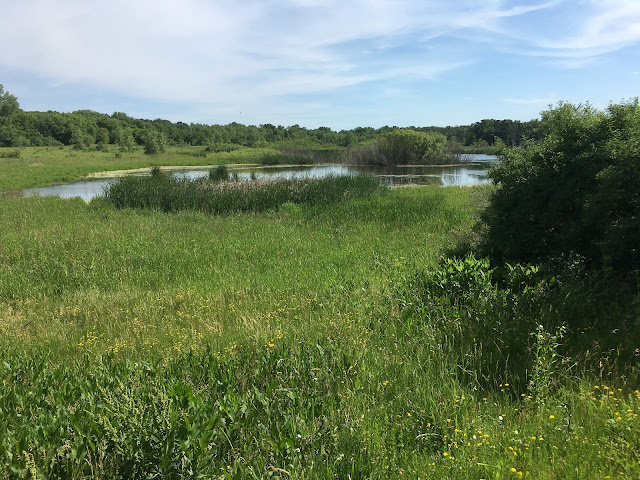 Right next to this patch of flowers was one of the stormwater ponds.  If you enlarge the picture, you may be able to see the general pattern of vegetation - close to me on the higher elevation a mix of forbs and grasses and at the water's edge some riparian reeds.  In between is a wide swath of tall grass. 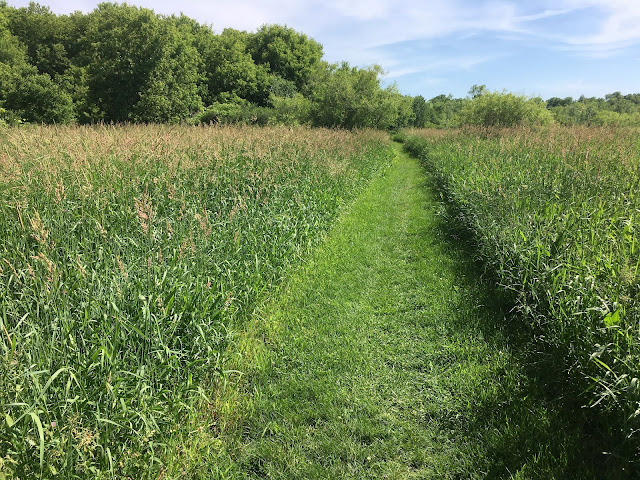 That tall grass became more evident as I walked from that nearby pond to the one at the other end of the park.  Along a path kept clear by city or county mowers the grass stood shoulder-high.  Some clover in the path itself, attracting skippers and a few other butterflies, but off to the sides just grass.

This is reed canary grass, an aggressive, invasive species.  In the past it has been used for erosion control, reclamation of deforested land, and as a reliable forage crop for cattle.  But those qualities also allow it to overcompete and dominate. 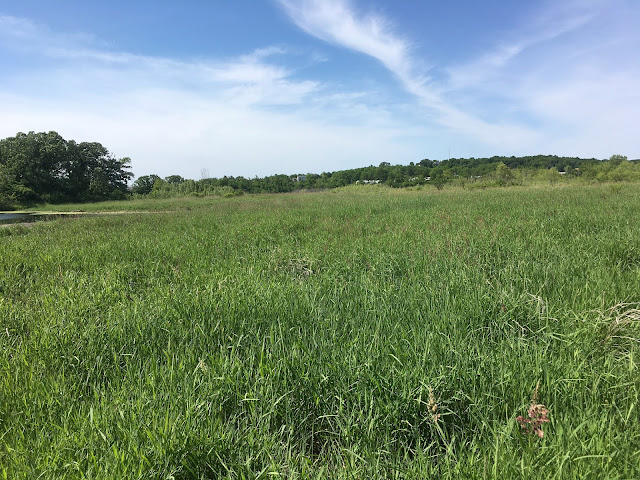 This was the end-point of my walk, at the most distant stormwater pond.  When I stood here about 10 years ago, the vegetation in front of me started near my feet as a prairie/field wildflower mix, then morphed toward the pond to water-tolerant plants, then to the usual reeds etc at the waterline.  Now it's a boring monoculture of reed canary grass. 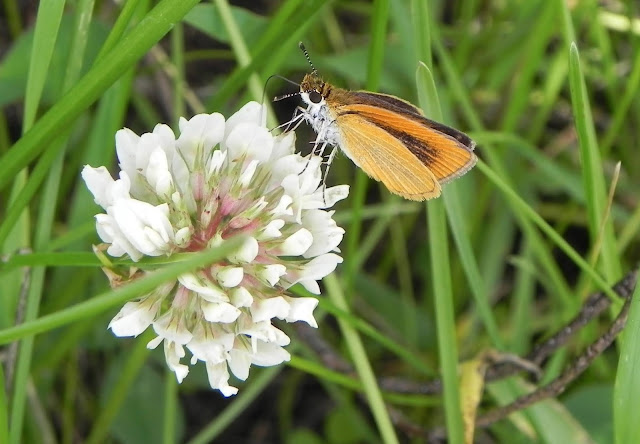 As I walked back to my car I continued monitoring the butterflies.  Total count for the day: two Monarchs, five Least Skippers, two Silver-spotted Skippers, and one Checkerspot. 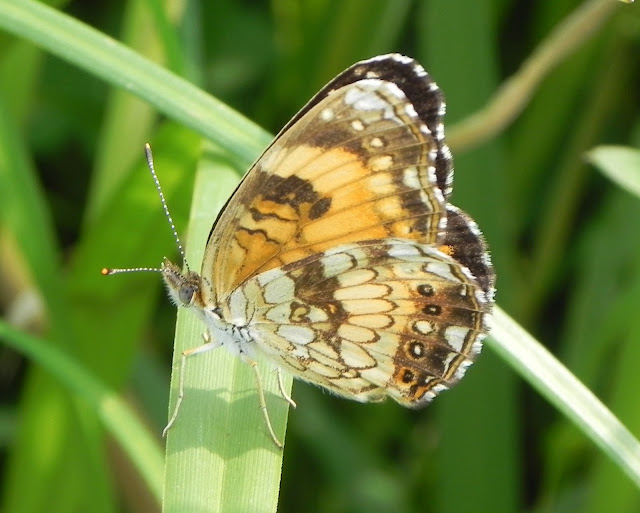 There should have been more on a perfect day on the cusp of summer.  There were more when I was young.  I'm not misremembering when I report that in the 1950s when you filled your car with gas, the attendant scrubbed your windshield to remove insect debris (the "windscreen phenomenon").   In that era people didn't stop what they were doing in order to point and say "Look, look, a butterfly!"  I'm a firm believer in the worldwide "insect apocalypse" (and here).  Coming generations are going to inherit a natural landscape that will be quite a bit less diverse and less interesting that those that came before.
Addendum 2021:  Updating with a photo from a walk at the same location one year later.  I paused at this patch of goldenrod - 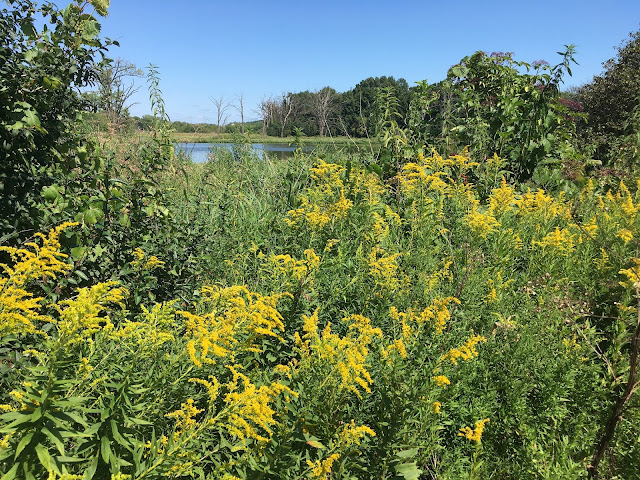 - and waited several minutes to count the visitors - just a very, very few solitary bees.  This on a late summer (August) afternoon with bright sunshine and temps in the 80s.  This goldenrod should have been swarming with bees.   The goldenrod next to my driveway at home IS swarming with bees (and small beetles) - too numerous to count the same afternoon.
I didn't take a photo looking the other direction, but behind me at the time was a farmer's cornfield.  I think the relative absence of insects here is not a coincidence.
Reposted from last year to add this image: 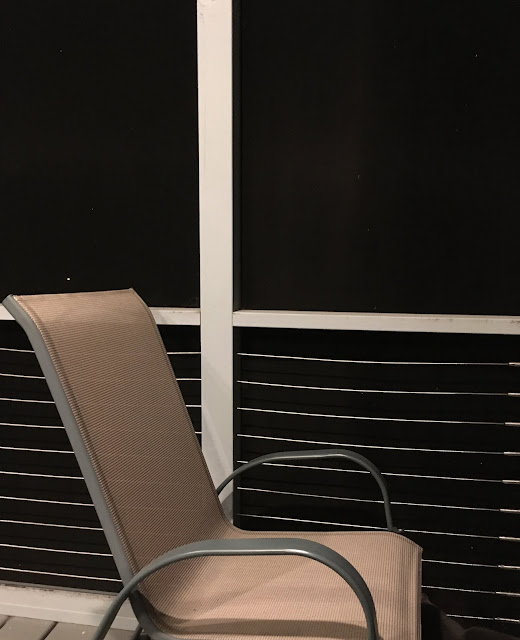 Photo taken late at night on the screen porch of a home in the suburbs of Madison, Wisconsin.  Not visible in the darkness is a woods behind the home.  This was a late-summer/early-fall evening with temperatures in the mid-70s after a warm sunny day.
That screen should be full of "bugs" (not butterflies at night, of course, but there should be dozens of moths).  I sat there reading for a couple hours after dark, with several ceiling lights on (illumination as per the image), waiting to see what moths might appear.  Zip.  On some of the other screens there were a few beetles.
When I was young and used to read at night by a window, first the moths would come and then the tree frogs would come up the window with their sticky feet, to harvest the moths.
I fully understand that data based on a trial of n=1 can be only anecdotal, but I still firmly believe that an insect apocalypse is underway.