Retirement living for my grandmother 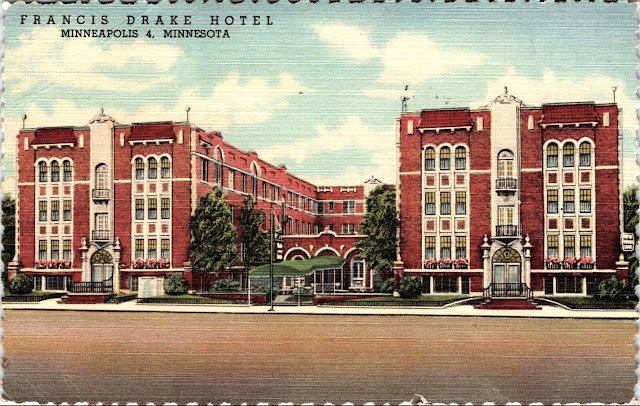 After my grandmother Selma Finseth was widowed in 1960, she moved off the farm in southern Minnesota to a facility in Minneapolis that provided facilities equivalent to a modern senior living center.
The Francis Drake Hotel was not designed specifically for seniors; it was a more broadly-purposed "apartment hotel" that also catered to posh travelers and bachelors who didn't know how to cook, as described in this promotional text from the 1920s:

A magnificent new apartment hotel, one of the outstanding buildings in Minneapolis. Conveniently located at Tenth Street and Fifth Avenue South. The Francis Drake was designed to meet the particular needs of discriminating residents and transients. It represents the utmost in careful planning. good construction, complete equipment and elaborate furnishing...
Accommodations of this ultra modern apartment hotel include 108 apartments and 50 transient chambers. Sixty of the apartments have Pullman kitchenettes, 18 are augmented by an additional dinette, and 30 are bachelor apartments. Every room has a private bath. Furnishings include the most magnificent of over-stuffed furniture, made in Minneapolis and purchased through leading Minneapolis retail establishments, and all furnishings chairs, wall beds, draperies, rugs and carpets have been tastefully selected to serve the needs of the rooms for which they were chosen. All furnishings—bedroom furniture, odd decorations are of the richest and finest; the best products of establishments renowned for high grade furnishings. Frigidaire electrical refrigeration is used throughout the Francis Drake, apartments being equipped with the Frigidaire models specially designed for use, thus relieving all guests of the annoyance of an outside ice supply. 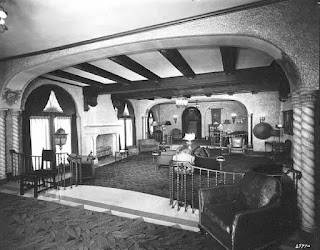 A free vacuum cleaning service is available to all tenants. The private laundry is completely equipped, including automatic dryers, and drying space furnished to guests. A water softening system provides soft water at ell times. The building has a vacuum heating system. General features of the Francis Drake include the Lobby and Lounge, with magnificent appointments: the ballroom of Moorish architectural design; a tastefully appointed dining room, the commissary, beauty parlors and barber shop. There is a billiard and amusement room for guests. Twenty-four hour desk and telephone service is maintained...

The hotel was built in the 1920s as a luxury facility to accommodate upscale residents and visitors, and was listed in the Green Book travel guide, but as the decades passed the "poshness" factor faded:

As historic hotels go, its design wasn’t particularly notable, even in its day. And the modest Renaissance Revival building was dwarfed by the massive Nicollet Hotel, a grand hotel that opened in 1924 on Washington Avenue.
The Drake, at 10th Street and 5th Avenue S., wasn’t in a fashionable neighborhood, like the Radisson, the Dyckman and the Andrews — all of which were bigger, fancier and located in the heart of the city...

During my grandmother's years there (1960-64) it was a comfortable apartment building within walking distance of downtown amenities, but it continued to fade thereafter:

Whatever vogue it had upon opening, it slipped into second-tier status after a decade or two. A desultory renovation in the 1960s refreshed the cafe and added an anomalously modern, multicolored plastic archway over one entrance.

In the 1980s it was repurposed for "emergency and transitional housing" for homeless people and locals displaced by tornadoes etc.  In 2019 it was gutted by a Christmas Day fire.
Sic transit gloria mundi.