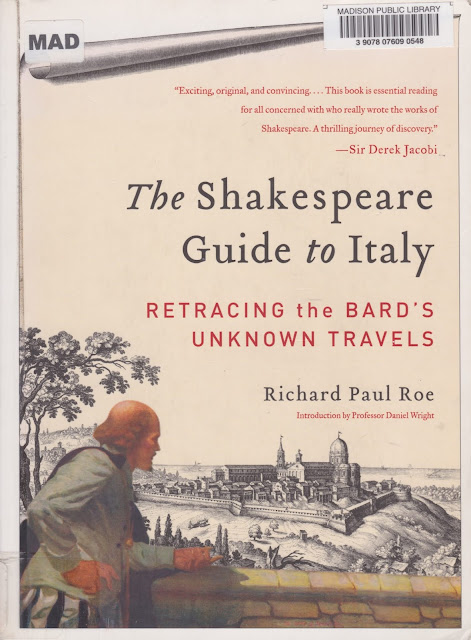 This is a fascinating book, which will be appreciated by any serious reader of the plays, but will be of extra interest to those familiar with the Shakespeare authorship question.  The author of this book does not express an opinion on the authorship question, but what he does do is to delve in intricate detail into Shakespeare's knowledge of Italian geography, history, and social relations - all of which are relevant to the authorship puzzle.  He did this by traveling around Italy to see in person the locations described in the plays.
Casual readers of Shakespeare may not realize to what extent Shakespeare focused on Italy.  It really is quite remarkable, and I didn't appreciate it myself until I encountered this table in the book: 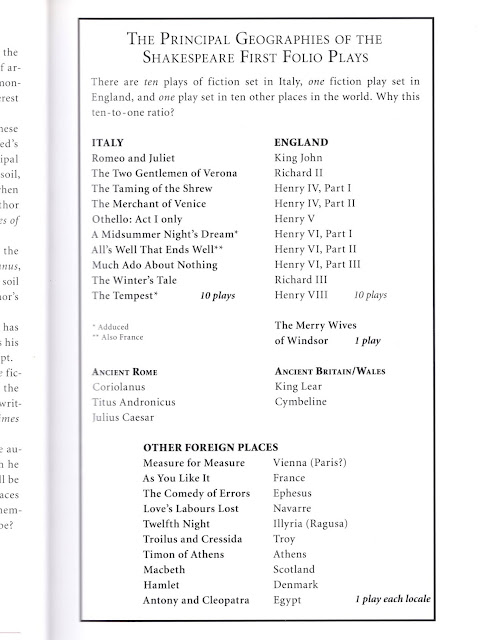 Note that of all the plays that are not historical, only one is set in England (Merry Wives) and only one most other places - but ten are set in Italy.
Some are obvious from the titles (Verona, Venice), some from the text (Romeo, Othello) and two by implication (The Tempest set on an island that matches Vulcano next to Sicily, and the "Duke's Oak" referenced in the A Midsummer Night's Dream is not a tree, but rather a passageway well-known in the sixteenth century in the Porta della Vittoria in Sabbioneta.)
So, how extensive was Shakespeare's knowledge about Italy?
Consider Romeo and Juliet.  The plot is not original to Shakespeare.  It was already an old tale back in the 1530s before Shakespeare was born; it was published in 1535, then rewritten by other Italian authors.  In the first act of the first scene of the version in the First Folio, Romeo's mother asks where her son is, and the reply is "... underneath the grove of sycamore/ That westward rooteth from the city's [Verona's] side..."  This detail is unique to the First Folio text ("there and nowhere else, not in any other Italian or French or English version - has it been set down that at Verona, just outside its western walls, was a grove of sycamore trees.")  And it is true.  To this day there are still sycamores in that exact location.  And Shakespeare knew that.
Also to be found in Shakespeare's version of Romeo and Juliet (and not in any previous versions) is reference to St. Peter's church in Verona - which does exist and is located in the same neighborhood described in the play.
The Two Gentlemen of Verona "is the play with the most, and most highly varied, descriptions of and allusions to things Italian in the entire Shakespeare canon.  Indeed, if critics were to choose one single Italian Play to criticize, this is that play.  Critics say it has an absurd Italy, with seacoasts and harbors that never existed, and historical events that never happened...."  Chapter 2 of this book documents in detail that everything described by Shakespeare about Verona and about Italy is in fact correct (or was in fact correct in the 16th century).

"The Riverside Shakespeare is not alone when it footnotes "road" as meaning a "seaport," which any mariner would know is exactly what a road is not... Along rivers the world over, there are wide places for ships to anchor called "roads."

Ports are on seacoasts, and are not synonymous with roads (or roadsteads), "and nowhere in The Two Gentlemen of Verona did Shakespeare write that there was a port of seaport at Verona, nor at Milan either." (as is often claimed).
Shakespeare has been lambasted by modern critics for placing a "sail-maker" in the city of Bergamo (Taming of the Shrew) because Bergamo is in the Alps, not on the coast, which is "claimed as proof of the author's ignorance of Italy's geography."  What these critics blithely ignore (or didn't know) is that "Bergamo is a city, from medieval times until now, devoted to the manufacture of textiles, which... has included velvet, silk, woolk, broadcloth... and always sailcloth, that ever-needed fabric made from hemp... The playwright knew that Bergamo was the principal source of sails for the Mediterranean world, and knew that Tranio's father could, indeed, have been a sailmaker there."  Sails were made close to the source of the textile; one didn't ship raw materials to a seaport to make the sails there.
In The Merchant of Venice, Shakespeare exhibits extensive knowledge about the Jewish community in Venice and about Jewish customs, kosher food, and clothing ("hardly everyday knowledge for an Englishman who'd never been beyond his native shores, or met a known Jew.") (Jews had been banned from England by the Edict of Expulsion in the 13th century and not allowed formal return until 1655).
Also interesting:  Of the 36 plays in the First Folio, 35 have men with swords.  "Only one Shakespeare play has no sword whatsoever: The Merchant of Venice."  When Portia dresses as a man, she wears a dagger instead.  Why?  Because "A sword was considered a weapon of aggression: while a dagger was ore often thoguht of as defensive.  Carrying a sword in the City of Venice was strictly against the law."  Shakespeare knew this.  Few people in sword-happy England would have.
And finally consider Othello.

"For the plot of Othello the playwright drew upon one of a collection of stories by the Italian scholar and writer, Giovanni Battista Geraldi, called "Cinthio" (1504-1573)... published in Venice in 1565...  No English translation of Cinthio's work appeared before 1753, resulting in speculation over the years about how the playwright got hold of Cinthio's story.  Here, with my emphases added, is an extract from Appendix 3 of the Arden Shakespeare Third Edition of Othello:

"This "lost English translation" proposition pervades nearly all analyses of the Italian Plays when the analyst cannot find an English version of the Italian, or Latin, source materials... the Arden continues:

"... whether we consider Cinthio or Chappuys or a lost English version as Shakespeare's original, a surprising number of verbal parallels found their way into the play from Cinthio, with or without intermediaries..."

The Riverside Shakespeare in its commentary says:

"Such verbal evidence as can be found tends to show that he looked at Cinthio's Italian.""

If one applies Occam's Razor, the most logical explanation of all this is that Shakespeare not only traveled to Italy, but also could read Italian.