A history of disinfected mail 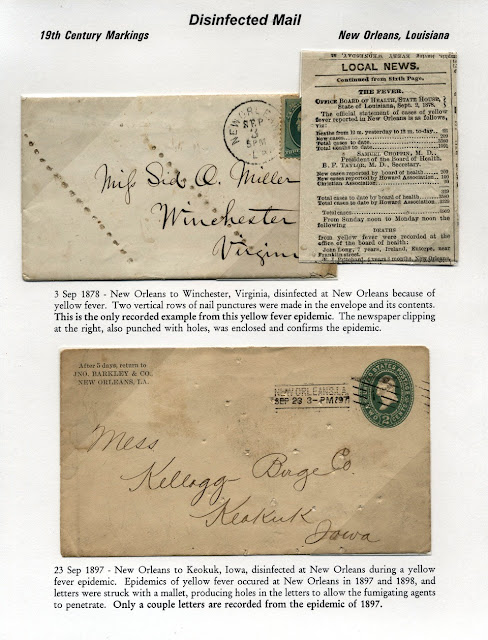 As soon as humans became aware that infectious diseases could be transmitted by fomites (inanimate objects), attention was directed to developing methods of disinfection. Postal and public health authorities had to deal with a wide variety of extremely dangerous infections (cholera, yellow fever, smallpox, leprosy, anthrax), and applied a surprising variety of techniques to letters and packages sent through the mails, beginning as early as the 15th century in Venice.

A very informative philatelic exhibit presents examples of how the U.S. has dealth with potentially dangerous items.  Shown at the top, for example, are two letters from locations where yellow fever was present; they have been punctured to allow fumigating agents to reach the inside of the envelope.  The bottom envelope in this image - - had its corners clipped off so that formaldehyde gas could be introduced to kill smallpox.  Other letters and postcards were autoclaved or steam sterilized, which could be deleterious to the letters inside.

These precautions were not limited to the preantibiotic era.  In 2001 threats of anthrax attacks were made in the United States, and a variety of special precautions, including x-irradiation, had to be undertaken, beginning at this page of the exhibit and continuing for a dozen pages thereafter.  And these letters from Hawaii in 1900 show how holes were punched in the envelopes - 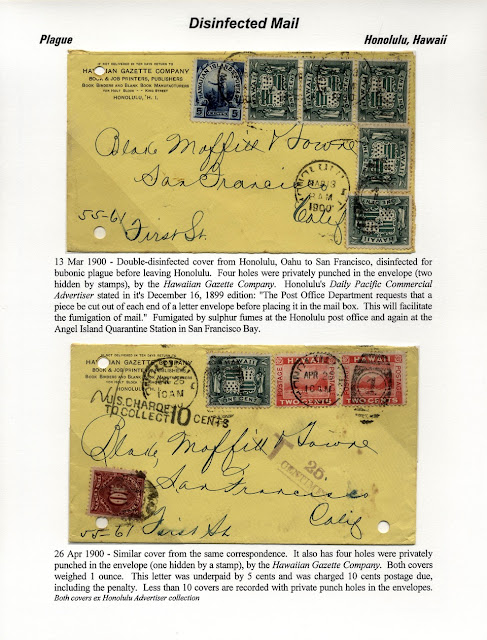 - so that sulfur fumes could be insufflated before they were sent from areas quarantined for bubonic plague.  Other examples are shown of disinfection of mail from the Hawaiian leper colony.

Philatelic exhibitions are conventionally mounted on a series of glass-fronted frames, with up to 16 letter-size pages in one frame, and in this case spread onto six frames.   This award-winning exhibit was created by William A. Sandrik of Arlington, Virginia.  The entire exhibit may be viewed at Exponet (frame 1, frame 2, frame 3, frame 4, frame 5, frame 6).

And those interested in philately (stamp and postal history collecting) should browse the Exponet site beginning at this index page.  Over 600 exhibits are accessible, on a huge variety of topics, in a wide variety of languages.

Reposted from 2011 because of its timely subject matter.   Today a New York Times article addresses the question of transmission of coronavirus by mail:

A representative for the U.S. Postal Service was unwilling to discuss current sanitization protocols. But the agency’s website reports that the only mail items receiving treatment are letters and parcels sent to ZIP codes beginning in 202, 203, 204 and 205, which serve federal government agencies in Washington, D.C. In a process that began shortly after the 2001 anthrax attacks, the Postal Service sends mail destined for those ZIP codes to New Jersey, where they are put on a conveyor belt and passed under a high-energy beam of ionizing radiation that kills bacteria and viruses. The letters and packages are then “aired out” for a while, before being forwarded to their destinations. The paper is left slightly faded and somewhat crispy, but sterile.

Should mail irradiation be extended beyond these exclusive ZIP codes, to help prevent the spread of the coronavirus? On CBS News’s Face the Nation on Sunday morning, Scott Gottlieb, the former commissioner of the Food and Drug Administration, warned that SARS-CoV-2 could potentially be transmitted by contaminated objects. “This is a sticky virus,” he said. The structure of the coronavirus’s protective envelope helps it bond tightly to certain surfaces: skin in particular, as well as fabric and wood, but also plastic and steel...

David Partenheimer, a spokesman for the Postal Service, noted that the surgeon general, Dr. Jerome M. Adams, along with the Centers for Disease Control and the World Health Organization, has “indicated that there is currently no evidence that COVID-19 is being spread through the mail.”..

Then again, contact transmission is notoriously difficult to study and document...