Word for the day: faience 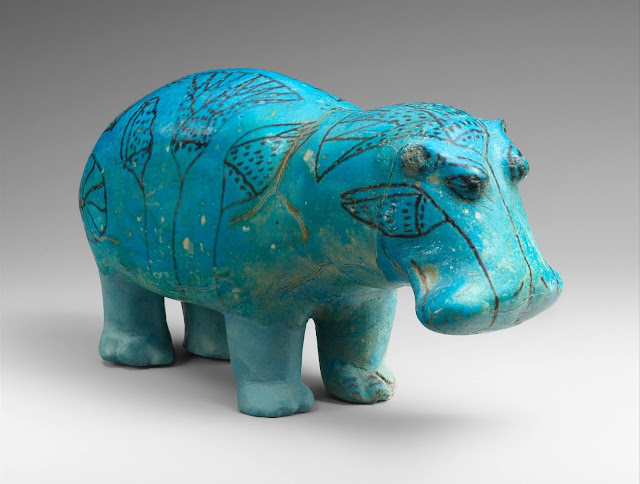 I've seen the word on museum tags, but never took the time to look it up, until today - inspired by encountering the appealing image of William the Faience Hippopotamus.


"William" is an Egyptian faience hippopotamus statuette from the Middle Kingdom, now in the collection of the Metropolitan Museum of Art in New York City, where it serves as an informal mascot of the museum...  This 20 cm (8 in) figurine in Egyptian faience, a clay-less material, has become popular not only for his endearing appearance but also because his defining characteristics illustrate many of the most salient facets of craft production in ancient Egypt during this time.

Here's the skinny on faience:


"The term is used for objects with a body made of finely powdered quartz grains fused together with small amounts of alkali and/or lime through partial heating. The bodies are usually colourless but natural impurities give them a brown or greyish tint. Colourants can also be added to give it an artificial colour. It can be modelled by hand, thrown or moulded, and hardens with firing. This material is used in the context of Islamic ceramics where it is described as stonepaste (or fritware). Glazed composition is related to glass, but glass is formed by completely fusing the ingredients in a liquid melted at high temperature. This material is also popularly called faience in the contexts of Ancient Egypt and Ancient Near East. However, this is a misnomer as these objects have no relationship to the glazed pottery vessels made in Faenza, from which the faience term derives. Other authors use the terms sintered quartz, glazed frit, frit, composition, Egyptian Blue, paste or (in the 19th century) even porcelain, although the last two terms are very inappropriate as they also describe imitation gems and a type of ceramic."

More at the link, including the difference between Egyptian faience and Italian faience.