Bet you can't guess what city this is 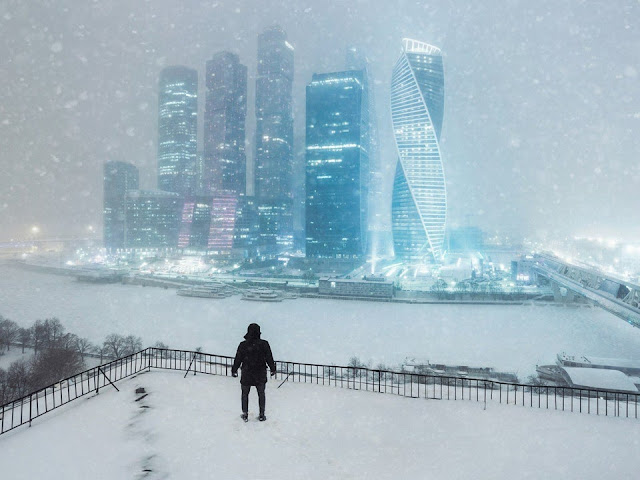 Photo via the Pics subreddit, where I found these comments:

"the skyscrapers are part of a smallish new financial district in the works. Moscow itself is very cool IMO - its a very old city (established c. 12th century) and has been redone many times, so you can see the different time periods depending where you go. Moscow city proper used to be considered within the MKAD circular highway that does a loop around the entire city and is usually completely congested, but was recently expanded to include most of the surrounding "oblast'". Towards the outer part of the MKAD, you have your "sleeping regions" - lots of soviet-era apartment blocks with some newer buildings, as well as "mega-malls" dotted around here and there. The interesting part here is that the apartments aren't flush with each other like in cities such as New York, most are free standing and there is lots of greenspace (or highway) in between. In that sense moscow is very "spread out" - lots of parks, from community gardens to large wildernesses (the North-eastern part of moscow is one very large forest/park called Elk Island). Parks are becoming a bigger deal in moscow, the city has been renovating and generally adding cool stuff to the city parks. There is the VDNKh, which used to be the USSR's national exposition, with pavilions for each republic, as well as dozens showing off everything from space tech to agriculture and farming. Today, it is still very much active, with many permanent as well as temporary exhibits. There is also a real-life Vostok rocket near the center. Beyond that, there is the riverfront park, which stretches along the moscow river for quite a while. There is Vorobievie Gori, and krilatiskie holmi, as well as many other university parks and lakes and promenades and shit. Biking is actually a very good way of getting around if you know the way - you can bike a good distance around the city without ever leaving a park for long.

Closer to the center, the city actually grows "shorter". This is the older part of the city - the buildings are generally pre-soviet except for a few government buildings. Here you have the arbat - a pedestrian avenue with shops and stuff in the middle of moscow. You have the kremlin of course, the big theater, the red square, as well as many other historical buildings such as pushkin's home, etc. In general, moscow is a pretty unique city - unfortunately its pretty large as well, so getting around usually means the metro or traffic. There are a ton of museums, from war to art to archaeology. There are lots of parks as I mentioned before, as well as grandiose soviet and pre-soviet monuments and some neat architecture too. I would recommend a visit for sure, in my opinion its one of the coolest cities I've been."

"This is an exceptional part of the city though, where most of the skyscrapers are. Kinda like Canary Wharf in London or La Defense in Paris. Other than that, there are only a handful of "Stalin's High-risers" around the town (one of which is home to Moscow State University)."

"It's big. Very, very, very big. Helsinki, it's population and everything in it would be an outer suburb. Moscow is bigger than London. The part in this photo is the CBD area, and a very, very, very small part of the city. Actually, Moscow doesn't have much of a cityscape view like most other big cities. The Kremlin and St Basil's is pretty much what springs to mind, but what it actually is, is an absolutely beautiful place in the world with many enormous parks, museums, churches and architecture. You can't capture it all in just one scene. You should definitely visit."