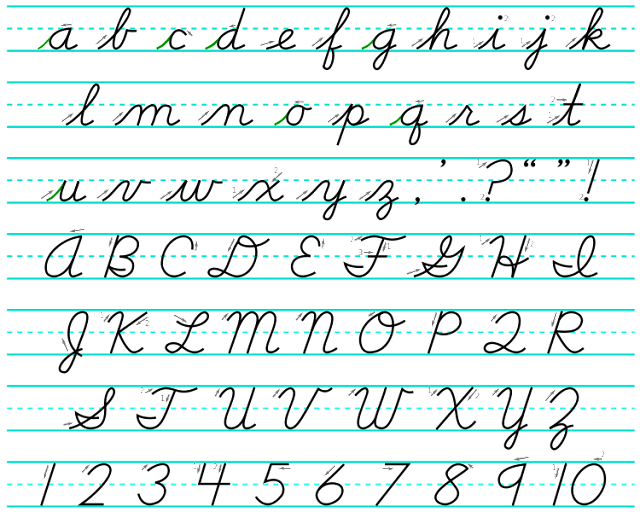 From an op-ed piece in the New York Times:


Districts and states should not mandate the teaching of cursive. Cursive should be allowed to die. In fact, it's already dying, despite having been taught for decades. Very small proportions of adults use cursive for their day-to-day writing. Much of our communication is done on a keyboard, and the rest is done with print.

Additionally, there is little compelling research to suggest the teaching of cursive positively affects other student skills enough to merit its teaching. While both research and common sense indicate students should be taught some form of penmanship, there is simply no need to teach students both print and cursive...

Given these realities, teachers would be better off focusing on the skills and knowledge that will impact student success in the future. These include printing and typing, but not cursive. As we have done with the abacus and the slide rule, it is time to retire the teaching of cursive. The writing is on the wall.

Not only did I learn cursive, I learned the abacus and the slide rule as well.  Sigh...

Image from Wikipedia, where I also found these interesting tidbits:


While the terms cursive or script are popular in the United States for describing this style of writing the Latin script, this term is rarely used elsewhere.

The origin of the cursive method is associated with practical advantages of writing speed and infrequent pen lifting to accommodate the limitations of the quill. Quills are fragile, easily broken, and will spatter unless used properly. Steel dip pens followed quills; they were sturdier, but still had some limitations.

The term cursive derives from the 18th century French cursif from Medieval Latin cursivus, which means literally running. This term in turn derives from Latin currere ("to run, hasten")

In the Classical Arabic script, letters of any given word are joined to one another by a continuous flowing line. This flowing script inspired the cursive of Medieval Latin, which in turn developed into the longhand script of English [embed at right]

Cursive handwriting developed into something approximating its current form from the 17th century, but its use was neither uniform, nor standardized either in England itself or elsewhere in the British Empire.

I'm reposting this rather popular post from 2013 to add the following update about the cursive debate arriving in Wisconsin:

A bipartisan bill requiring all schools to teach cursive writing has been estimated to cost as much as $6 million, but not all supporters of the proposed mandate think the state should help foot the bill. While members of the Senate Committee on Education on Tuesday agreed with the value of learning cursive writing skills, some raised concern that the bill — which does not include funding to public or private schools to offset the cost of implementation — would provide Wisconsin schools with yet another unfunded mandate...

A Department of Administration fiscal estimate for implementing a statewide cursive program projects the per-student cost at $10 to $35 a year and the per-teacher cost at $25 to $160 annually...


Dan Rossmiller, director of government relations for the Wisconsin Association of School Boards, said in a letter to committee members that the association generally opposes any unfunded mandates on schools.
Achieving mastery of cursive writing can take an “enormous amount of instructional time,” Rossmiller said in the letter.
“In a world that is increasingly moving away from paper communications toward digital and electronic communications, we question the value of spending a significant portion of instructional time in third or fourth grade on cursive writing,” Rossmiller said in the letter.

When I originally posted this topic, the cost of teaching cursive was not considered either in the post itself or in the numerous comments.

I also shared the above links with an old classmate of mine whose career was in education.  His response: "Teaching cursive over the course of several years adds up to a lot of time -- what do we replace/ignore in elementary schools to make the time available?... One of the big problems I have with education law in every state is that it is written by people who, for the most part, have no knowledge of educational best practices... [re] terms like proficiency and mastery in reference to kids "passing" cursive. What do those words even mean?"