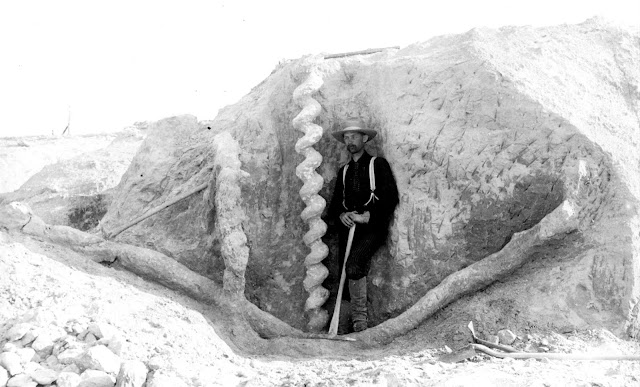 An article at Smithsonian explains the history and science behind the unusual trace fossils known colloquially as "devil's corkscrews."

One of the most unusual fossils ever to be found are strange tall structures recovered across Nebraska, primarily in the state’s northwestern badlands and in neighboring parts of Wyoming. Known locally as Devil’s Corkscrews, each structure is the infilling of a left- or right-handed spiral or helix that can extend up to seven feet into the ground. At the deep end of the spiral, a tunnel extends sideways and up at an angle. These structures became exposed by weathering of the soft rock enclosing them on the sides of bluffs or ravines. They mainly occur in the fine-grained sandstones of the Harrison Formation, which dates from the Miocene epoch and are about 20 to 23 million years old... 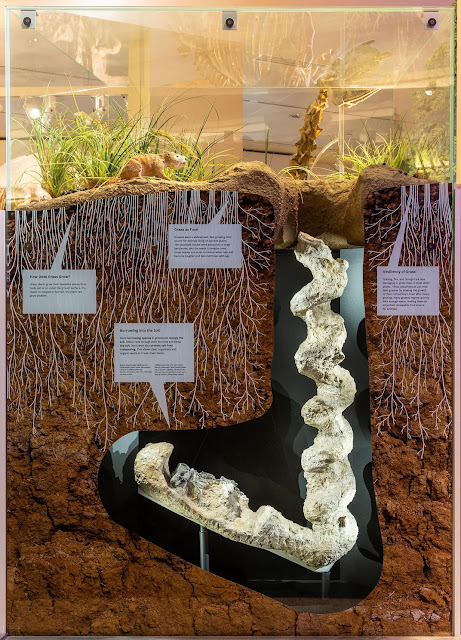 Martin and Bennett found that the incisor teeth of the extinct beaver Palaeocastor were a perfect match for the grooves on the infillings of the Devil’s Corkscrews. These tooth marks affirmed that they were, in fact, burrows, spiraling tunnels that the beaver Palaeocastor built mainly by excavating the soil with left- and right-handed strokes of its large, flat incisors. The animal also left claw marks, but they tended to be confined to the sides and bottom of the burrows. The initial burrow extended down as a tightly coiled spiral. At the bottom, the beaver started digging upwards at an angle of up to 30 degrees to create a chamber for itself. This portion of the burrow sometimes extended up to 15 feet.