A suggestion for next Halloween 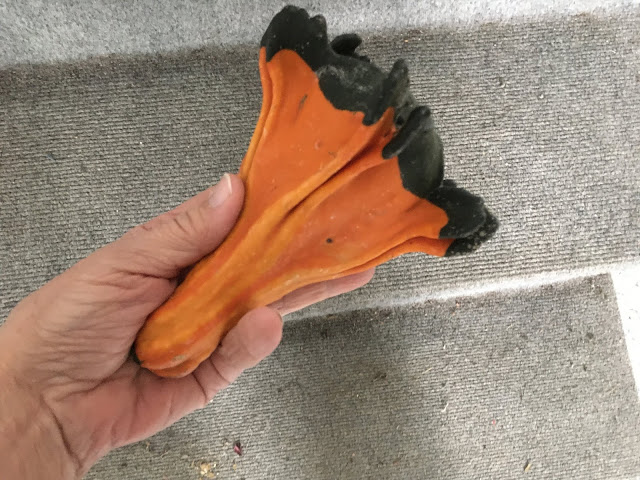 In previous years we have given trick-or-treaters a choice between candy and seashells.   This year we offered something else.

The story begins in early summer, when we noticed an unexpected melon plant growing in our tomato patch in the back yard.  We left it alone to see what would happen, steering it away from the tomato cages (it eventually engulfed one of them).  It spread over and between the pots with the Bell peppers and eggplants and headed out into the lawn.  Less grass to mow - fine. 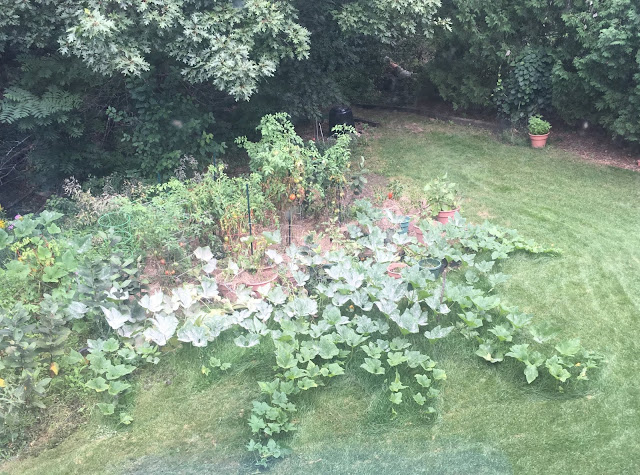 At its late autumn peak that single plant covered an area half again as big as shown in the photo above, and the fruit revealed itself as a decorative squash (top photo).

We had purchased a small bag of varied decorative squash for a previous Halloween, and had tossed them away out back for the local critters to enjoy.  One of them escaped predation and began this growth.  As the season ended we had dozens and dozens of gourds - and no use for them.  So, I loaded them into a wheelbarrow and parked it next to the sidewalk leading to the front door.  When the trick-or-treaters came to the door, they received their small bag of chips, and then we told them "help yourself to a gourd from the wheelbarrow."

The reaction was uniformly enthusiastic.  None of these well-behaved kids had taken anything from the wheelbarrow on the way to the door, figuring that it was a decorative display like the neighbors' ghosts and gravestones.  But on the way back to the street they dove in, and... "YAY!  Mom, look!  I got a gourd!"

Now I'm thinking ahead to next Halloween.  What else do I have that I need to dispose of?  Maybe some of my old comic books, but I wonder if they would be interested in picking through twelve years of back issues of Consumer Reports...?